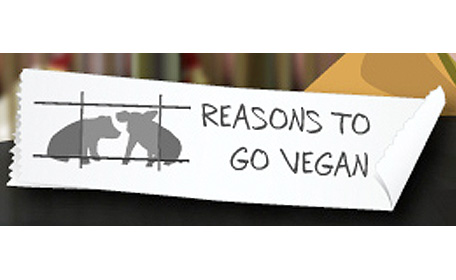 You probably already know about the love affair I am having with Vegan Cuts, the weekly email discount program that offers deals on vegan products and services. I like to refer to it as the Vegan Groupon. Our Hen House actually participated in it a few months ago, offering our ethically-sourced vegan tote bags for a discounted cost. The results were wildly successful, and that’s partly because the vegan community has glommed onto this free service. It not only gives us a sweet deal on everything from vegan make-up to glass straws for smoothies (who knew?), but it also lets us support those companies who truly deserve our bucks. 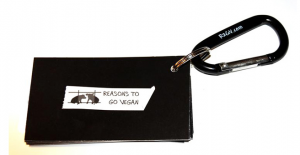 I could not pass up the opportunity to score this week’s deal, and I just had to share it with you. This week, for $12.00 (normally $20.97), you get not one, but three “Win Every Argument With the Reason to Go Vegan” keychains! Can you stand it? It’s from R2VG, or, Reasons to Go Vegan, which has the cutest website I’ve seen in a long time. According to VeganCuts:

Being vegan is pretty easy, but listening to excuses for animal exploitation can be really hard. “I love cheese too much” or “I buy free range eggs” doesn’t cut it. To do a good job of defending veganism, you really need to know your stuff. Even if you’ve read a lot of books and articles, it’s helpful to be able to call on some quick facts. That’s why the Reasons to Go Vegan keychain is so awesome. Small enough to fit in your pocket or bag, you can carry the nine Reasons to Go Vegan cards with you wherever you go. And because part of being vegan is promoting veganism, we’re selling the keychains in packs of three. Keep one for yourself and pass the others on to friends or even strangers. 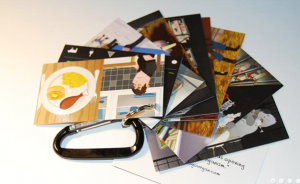 I must say, I dig this little keychain! Don’t tell them, but in addition to keeping one for myself, I plan on giving one to my mom and one to my grandma, because although they are veg (Mom is vegan and Grandma is vegetarian, mostly vegan — we’re working on it…), they know next to nothing about the issues. While I’m okay with someone going vegan simply because they know that it’s just WRONG to consume the byproducts and products of animals, I do think it’s also important to know your stuff. Hopefully, in addition to the ample books I’ve given them, this keychain will be a Cliff’s Notes of sorts.

Plus, people frequently comment on my keychains — like when I’m at the bodega or the laundromat or the library. I sometimes wear my keys around my wrist, thanks to an ugly pull-y type bracelet-y thing that’s attached to them. So now, I’ll have another reason besides convenience for carrying my keys for all to see. I’ll be spreading veganism by way of my keychain. How rad am I?

They make great stocking stuffers, too, and, if you’re like me, you’ve already started your holiday shopping! Neurotic, I know, but I can’t help it.

It expires in 3 short days! What are you waiting for? Snag the deal!

“Finding Vegan”: What a Find!

“I’m Sorry: How An Apologist Became An Activist” Comes to NYC Fringe,...