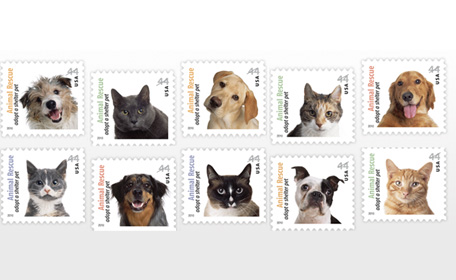 Chances are, you still send mail sometimes…  As in, real mail… The kind you have to post. Ya with me?

Now — in addition to all the “Meat is Murder” stickers you probably already put on your envelopes (because, obviously the person who opens your credit card bill needs some ‘go vegan’ messaging just as much as the next guy) — there is now another way you can be a mail activist, too. 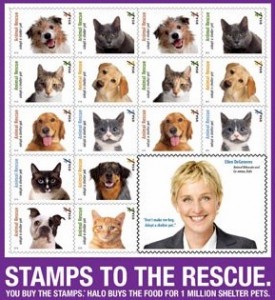 Thanks to Vegan Queen Almighty, Ellen DeGeneres (and in the very off-chance that  you’re reading this, Ellen, ohmygodiloveyousomuch), you can now purchase Stamps to the Rescue, which is part of a nationwide campaign to encourage animal adoption from shelters and rescue groups. The stamp collection, called “Animal Rescue: Adopt a Shelter Pet,” was photographed by Sally Anderson-Bruce, who found the perfect adopted dogs and cats in her Connecticut hometown of New Milford.

Awareness-raising stamps? Maybe it’s about time to rekindle a relationship with that Eskimo pen pal you used to kind-of not-really know. Screw Facebook.