At Our Hen House, we do our best to bring you the latest from the world of animal rights. That said, when it comes to telling you about books, there are just so many amazing new ones covering all kinds of animal issues, and we simply don’t have time to review them all (but don’t miss the ones we have reviewed). That’s why we thought long and hard and decided to bring you this exciting program. From time to time, we’ll publish excerpts of the author’s choice — highlighting the best in  animal rights books (both fiction and non) — right here on our online magazine.
One general note about OHH’s intention to publish excerpts: We do our best to choose excerpts from books that reflect our values to change the world for animals, and to end their exploitation altogether. However, we are not able to read all of these books in their entirety, and so please note that the books we choose do indeed intrigue us, but might not fully be in line with our ethos — though we hope they are. In other words, vet these for yourselves, and feel free to share your thoughts with us at by emailing info [at] ourhenhouse [dot] org. 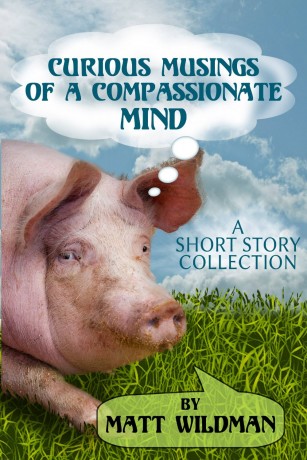 Flock members — you get to read the entire story! (Not a flock member yet? Join us!)
***
What’s for Dinner?
by Matt Wildman
The ashen spaceship hovering several hundred feet above the Victorian homes of Cape May, New Jersey looked like a vast cauliflower or rather a gargantuan brain, certainly more mechanical than appetizing. Ten minutes after its unanticipated appearance every e-mail inbox in the world received the following message (written in the appropriate local vernacular),

Provide us with your best being. You have thirty minutes. Based on who you send we will determine how to interface with your planet. Place the being’s name and location at www.bestbeing.org.

Matt Wildman, a former NYC public high school teacher, now volunteers his time helping to keep pets in their homes. He is a cat behavior expert who assists cat owners in crisis, and also an advocate for tenants with pet-related landlord issues. He currently lives in NJ with his nine dogs and three cats. His collection of short stories, Curious Musings of a Compassionate Mind, is available on most e-readers.
Share 0 FacebookTwitterPinterestEmail
previous post

Tickets Are Going Fast, and You Don’t Want to Miss This Party on 6/26 in Brooklyn!