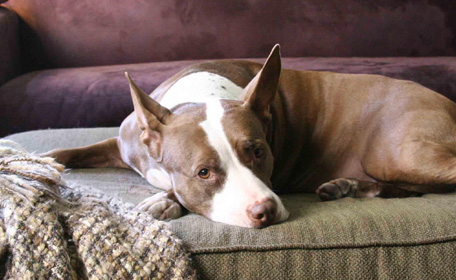 Lou Reed and Laurie Anderson are not just any ordinary famous couple. These music icons have a place in their hearts for animals, and they have been vocal about their support of certain animal rights issues, including banning the cruel “delicacy” known as foie gras. (It should be noted that their anti-foie gras advocacy began because of their friendship with fellow musician-turned-activist Joy Askew, who speaks about Lou and Laurie on our most recent Art of the Animal series.)

Now, Lou and Laurie are taking their animal advocacy efforts and planning a concert for the dogs. No, literally … for the dogs.

This Saturday morning, Sydney, Australia will be howling. The world premiere of a high-frequency concert featuring Lou Reed and Laurie Anderson will be music to dogs’ ears. According to the Sydney Opera House (where the concert will take place):

“Laurie Anderson has composed a 20 minute work especially for the hearing range of dogs – who can hear frequencies far outside the human audio spectrum. Taking the idea of the apparently inaudible dog whistle to new artistic heights, our canine friends will be treated to a glorious cacophony of sound, while all we will hear is the lapping of the water on the harbour. The morning will be an inter-species social gathering on a scale never seen before in Australia.”

My pit bull, Rose, simply cannot wait. (She’s bad at geography, so please don’t tell her that Australia is on the other side of the world from our home in NYC.)

Unfortunately, the breakfast that will be served at this dog-a-licious event will include eggs and bacon, which, last time I checked, was not animal-approved. Not by this animal, anyway, and certainly not by the egg-laying hens and the pigs who were tortured and killed so that dogs can enjoy a morning of music.

If it weren’t for the menu, I would hands-down (paws-down?) be a fan of this dog-in-mind concert, just as I’m a fan of Lou and Laurie’s outspoken advocacy around the horrors of force-feeding ducks. Now if we can only get them to try some tofu scramble …