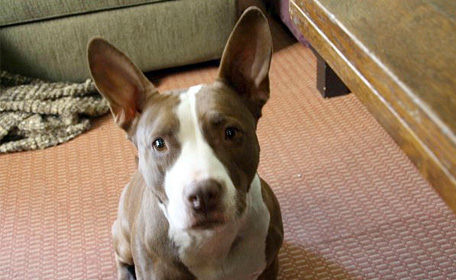 Lawyers, law students, and animal advocates of all breeds, listen up! Earlier this week, the American Bar Association took a policy position opposing breed-discriminatory legislation, which in many communities across the country translates into pit bull bans. After we (along with our darling pit bull, Rose) stopped celebrating the news of this important policy move (carrots for everyone!), we caught up with Best Friends Animal Society Senior Legislative Attorney Ledy Van Kavage (who enlightened us on our podcast way, way back on Episode 18), who just left the helm of the American Bar Association TIPS Animal Law Committee (a position I also had the honor of holding the previous year), and asked her a few questions about Resolution 100, the final important policy achievement of the Committee under her leadership. This is huge.
***
Our Hen House: How will this resolution help get dog-friendly laws passed?

Ledy Van Kavage: The new ABA resolution will have a huge impact. Individuals who are opposed to breed discriminatory laws can let attorneys who represent cities or towns that are considering such laws know about the resolution and can provide them with copies of the report that accompanies it, which provides numerous reasons — fiscal and legal — why canine profiling doesn’t work. Hopefully, the ABA will carry some weight in discouraging the adoption of such laws. What’s more, if a community does enact a breed discriminatory law and there is someone who has standing to challenge it, the American Bar Association can submit an amicus brief supporting their claim. This is America. People love their pets. Responsible people should be allowed to have whatever breed or type of dog they choose. Reckless people should be prohibited from having any pet.
OHH: Tell us a bit about the very frightening situation that’s going on in Maryland right now, where the Supreme Court has ruled that pit bulls can automatically be assumed to be dangerous, even if they have never harmed, or even growled at, anyone.
LVK: Many attorneys in the Maryland Delegation to the ABA House of Delegates were horrified by the Tracey v. Solesky decision, and voted for the resolution. There is actually a legislative hearing on the crisis caused by the case this week, and I understand some folks plan to use the resolution in their testimony to try to get legislation passed that would change the law back to where it was before this wrong-headed decision. And, of course, the court still has the case under reconsideration. Maybe the judges will consider the ABA’s stand.
OHH: Do you think that bar association committees, and specifically, the American Bar Association’s TIPS Animal Law Committee, are useful for lawyers who want to get active in changing the world for animals?
LVK: I think lawyers should get involved with the ABA TIPS Animal Law Committee, or any ABA committee, because you can make huge policy impacts, especially when it comes to legal issues affecting animals at the federal level. If you can get a resolution passed by the ABA, and/or if you can get the ABA to submit an amicus brief on an issue, the impact can be huge.
OHH: Let’s get personal. Tell us about a dog you’ve met who was saved because a lawyer stepped up to fight breed discrimination.
LVK: Breed discrimination kills. Best Friends has a great young attorney working for us now — Katie Barnett – all because of a dog she rescued during Hurricane Katrina. Katie didn’t know the dog’s heritage, but her square-headed muscular mutt was apparently deemed a “pit bull,” and one day the folks from Animal Control in her Kansas town came to her door and told her she had to give up her dog. Instead, Katie got ticked off, then moved and went to law school. She is now part of Best Friends Pit Bull Terrier Initiatives, and was one of the authors of the ABA Resolution. Individuals can really change the world.

Episode 135: “If you can’t annoy somebody, there’s little point in writing.”