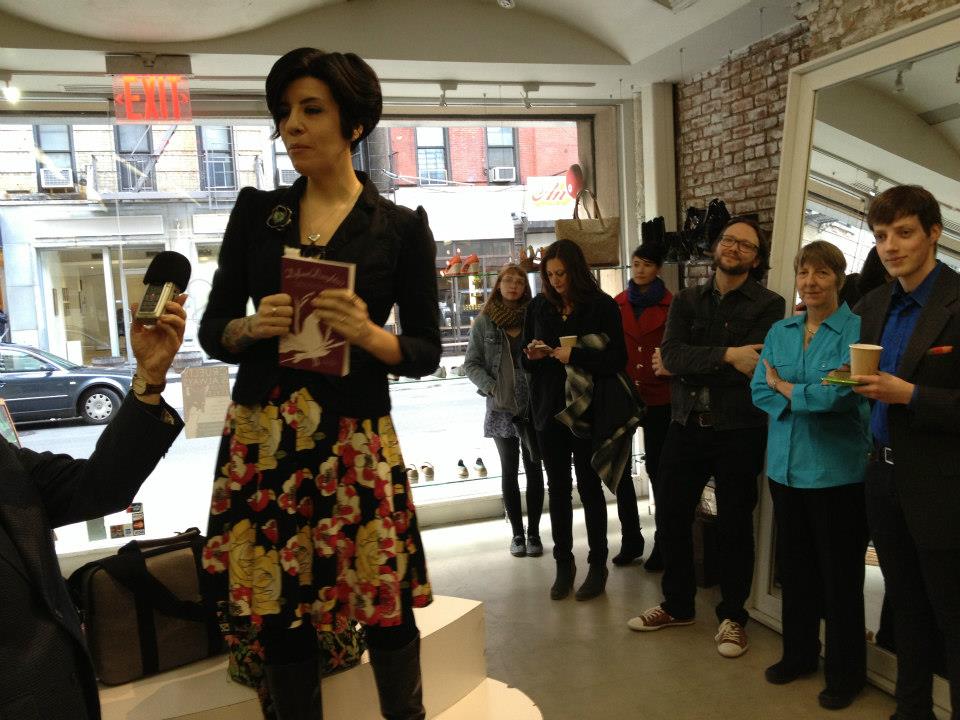 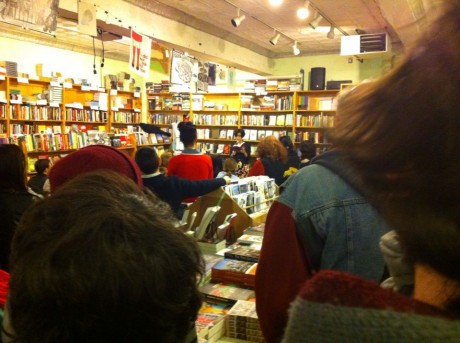 Standing room only at the recent NYC book reading of Defiant Daughters.

Remember when that small, purple book burst into the animal rights literary canon in a big, purple way? (We’re talking about Lantern’s Defiant Daughters, here.) We like to relive that moment as much as possible, so #ThrowbackThursdays seem like a great time to do so!
This articles originally appeared on Our Hen House on April 17, 2013. If you’d like to see a certain OHH article resurrected, email us at info [at] ourhenhouse [dot] org.
***
This past Monday [Editor’s Note: …and two years ago…], Jasmin was featured on The Huffington Post, in an interview called “Our Hen House’s Jasmin Singer and the Art of Defiance.” Her interview was part of the Meatless Monday column, written by Ellen Kanner. If Ellen’s name sounds familiar, it may be because Our Hen House’s Carrie Forrest recently interviewed her [Editor’s Note: well, not that recently anymore. And Carrie is no longer with OHH] about her book, Feeding the Hungry Ghost: Life, Faith, and What to Eat for Dinner. But this time around, the tables were turned, and Ellen’s interview with Jasmin resulted in a truly beautiful article that sensitively explores the connections between veganism and feminism. That connection is the central theme of Defiant Daughters: 21 Women on Art, Activism, Animals, and the Sexual Politics of Meat, the new [Editor’s Note: not so new anymore!] anthology to which Jasmin is a contributor. We are thrilled that the royalties of Defiant Daughters benefit Our Hen House. If you haven’t already, you might want to listen to an audio excerpt of Jasmin reading from her chapter, “Found Art, Found Hope,” watch a short video interview with her about the book, or read an excerpt.
But I digress. My real point is that Ellen’s interview with Jasmin, as published on HuffPo, was terrific, but abbreviated. The extended version is even better! Ellen’s questions were so thought-provoking, and Jasmin’s answers really shed light on her take on everything from activism to the changing shape of the world of social justice. Frankly, I felt they had to be read in full. So here it is. I hope you’re as inspired by it as I am.
We will publish half of the interview for all of you to read (below), and the rest of it will be available exclusively to our darling flock. (That’s because the flock receives exclusive content, access to contests, fabulous giveaways and discount codes, you name it. And our favorite anthology and our favorite documentary.) So sit back, relax, and enjoy Ellen Kanner’s intimate look at what makes Jasmin tick. (Special thanks to Ellen, of course.)
***
PART I: Interview with Jasmin Singer (JS) by Ellen Kanner of Huffington Post’s Meatless Monday (HPMM) column.

HUFFINGTON POST’S MEATLESS MONDAY: Congratulations on “Found Art, Found Hope.” I was really struck by the broad range of Defiant Daughters’ contributors, yet you all have something in common — you were all inspired by Carol Adams’s The Pornography of Meat and The Sexual Politics of Meat. What do you see as her legacy? 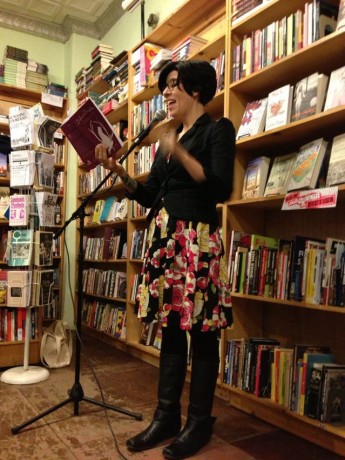 Where are All the Fictional Vegans? w/ Christine Melanie Benson

Turn a Call for Papers (or a Poetry Contest) Into an Animal...