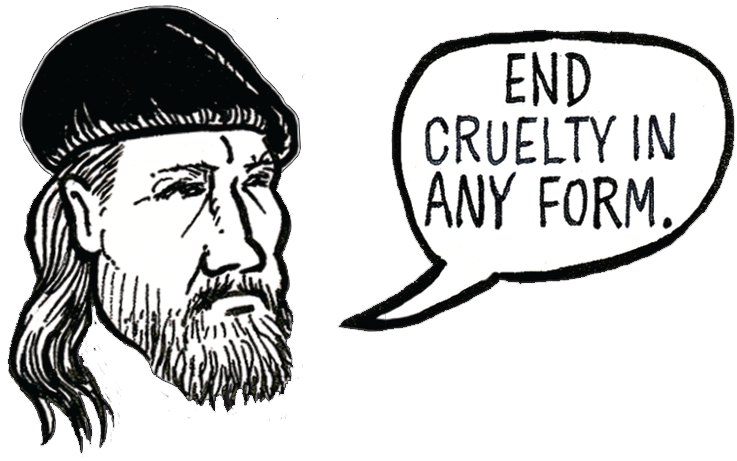 Illustration by Art Hondros, from “What Fox Guy Had to Teach Us,” in The Washington Post.

I love a good graphic novel. Alison Bechdel’s Dykes to Watch Out For is, like, my favorite thing ever —  the characters seem like old friends. The combination of evocative drawings with compelling stories and well-rounded characterization is different for me than any other form of literature or art. I become completely obsessed with a good graphic story — it probably dates back to my childhood days of reading the Sunday “funnies” front to back, not always getting the adult humor, but always utterly transfixed.

Given my gut reaction to this medium, I shouldn’t have been surprised by how deeply I was touched (to the likes of copious tears, at least one sleepless night, and a whole lot of inner-reflection) when I came upon the recent graphic biography, “What Fox Guy Had to Teach Us,” by Art Hondros — which explored the life of the late animal activist, Walt Rave.

Walt was an activist known to many of his neighbors in Takoma Park, MD for always carrying with him a fake-bloodied fox pelt in a steel leg trap attached to a chain. This was Walt’s prop, his advocacy tool — a way to convey the horror bestowed upon animals trapped for fur. He grabbed it before leaving the house in the same way I grab my keys or glasses; it was an extension of him, necessary for helping people to open doors and see things clearly.

Walt had been a vegan and an animal activist for decades; he was the designer of PETA’s now famous bunny logo. When he was gravely burnt from a house fire in December 2011, he hung on for 3 days before passing away. While in the hospital, Walt — whose injuries left him without the ability to see or speak — communicated through hand gestures and slight nods, as his visitors (hundreds of them — many of whom were heavy hitters from the animal rights movement) patiently went through the alphabet until reaching the letter that Walt wanted, acknowledged by his slight nod. That was how he communicated to HSUS’ Paul Shapiro that the reason he was in the burning house for so long before escaping was because he was trying to rescue his beloved cats (they did not survive — though Walt was spared that hideous news).

This is a tragic story, one of the most heartbreaking I’ve heard in a long time. Walt’s beautiful eulogy in The Washington Post is absolutely worth a read. But beyond the eulogy, it was the recently published graphic biography (also in The Post) that has tugged at my heartstrings, refusing to let go.

Art Hondros, the illustrator, did not know Walt personally. He lived nearby though, and was one of the many residents who wondered about this unusual man, and the fox pelt that he always carried around. Hondros begins his piece with this:

When I read of his death from a house fire in 2011, I immediately imagined a graphic narrative to encapsulate his life. I contacted two of his closest friends, Fred Hunter and Chris Nordby, and I started culling information and sketching. The more I learned about Walt, the more he stood out as an individual: a Vietnam War veteran who had been a tree surgeon, a nude model and a worker in Takoma Park’s tool library. He stuck solid to his principles against cruelty, even when he may have come across as unbalanced. Such utter conviction seems rare, and it is hard to capture even in black-and-white. Being, like Walt, an artist, a Navy veteran and a cat lover, I now find it unfortunate that I never stopped to chat with him once in a while.

And then, the graphic biography of Walt Rave — a largely misunderstood, rather eccentric figure with a deep passion and an unrelenting desire to change the world for animals — begins. Be prepared to have your breath taken away. The artwork and the story are told with a tender fondness, humble respect, and, at times, even a light and appropriate humor that will forever memorialize this man — Walt Rave — who has become a hero to me so quickly. Like Hondros, I wish I had known Walt. In some ways, I feel like this graphic bio has given me that special glimpse into his life that I wish I had been lucky enough to have in real time.

Through the power of Hondros’ narrative, a person whom some people might have seen as simply an oddball and nothing more — a man to silently observe from afar, a guy to possibly even avoid — has become the hero of a story that is accessible, beautiful, and deeply honest. Sometimes art can interpret a hidden reality in a way that allows its truth to be revealed. Maybe Hondros’ illustrations of Walt Rave effectively touched and inspired more people than Walt himself could ever have done (although from the hundreds of visitors Walt got while in the hospital, the constant flow of love and support in his final days and hours, it seems he had reached plenty). In this case, the art that tells the story creates a buffer that allows people to see, really see. And with “What Fox Guy Had to Teach Us,” what the readers and viewers are seeing is exactly what Walt wanted them to: the truth about the plight of animals, and the moral imperative that each of us has to change the world for them. But beyond that, Hondros’ images and words allows people (like me) to bear witness to a brave and kind soul who embodied compassion, and lived an ethical and full life — one we could each stand to learn and grow from.

Animal Law Podcast #17: Matthew Liebman on the Case Against the “Walmart...