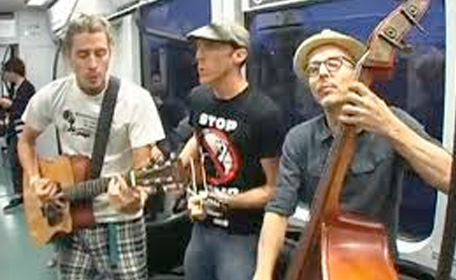 We have to admit that we love flash mob musicals. From the ridiculous to the sublime, we love them all. In fact, it is our fondest dream to one day actually be in the place that Improv Everywhere, or some other interpreter of this truly brilliant art form, decides to seize and turn into a Broadway stage. That being said, our very, very favorite flash mob themes are political, and we have always been particularly fond of the fabulous rendition of a variation on Lady Gaga’s “Bad Romance” that was used to call out hotels in San Francisco that were treating workers unfairly. If I find myself mindlessly humming that tune, you can bet that the words that go through my head have much more to do with bad hotels than with bad love affairs. 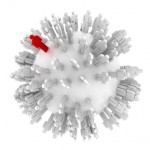 It has long been our hope (and secret ambition!) to bring flash mob musical activism to AR. And, while they are not exactly a mob, we are thrilled to see that The Haymarket Squares, a “punkgrass” band out of Arizona, has done just that. After all, the essence of the flash mob is the music and the takeover of public space, not the number of participants. And The Haymarket Squares definitely took over the space that they chose to target, which just happened to be their local KFC. Here are some of the choice lyrics which they treated the customers to:

Meet the product of laboratory tests, Stuffed in cages, a maze of metal nests, Drunk on hormones, they grow till they’re grotesque, It barely passes for a life, And at the end the butcher’s knife. They’re just animals, what’s the harm? Another day of dirty work, down on the farm.

This is undoubtedly one of my favorite videos ever in the whole world. I particularly love the dancing chicken.

For those in Arizona, you can catch the band live on July 22 at the Hollywood Alley in Mesa. The rest of us will have to settle for liking them on facebook, listening to their album and, if you’re like me, for just playing the video over and over and (in spite of the gruesome lyrics) laughing out loud every single time.