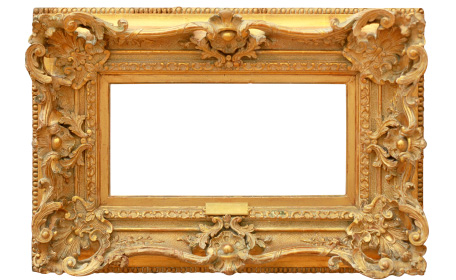 As we talked about on our most recent podcast episode, there is a Vegan Art Show going on here in New York City, and Mariann and I were lucky enough to attend last week’s popular opening night reception. You might remember that back in April, we blogged about the call for entries for this show, which is being organized by the Metropolitan Community Church of New York (“a church of lesbian, gay, bisexual, and transgender people” — cool, right?). We could not possibly be happier that this event, which we’ve all been waiting for, has finally come to fruition. And even though we had high hopes for it from the get-go, we were truly blown away by the level of talent within our community, and the artistic prowess that vegans in the NYC-area are using to speak up for animals in one of the most moving, powerful, and perhaps mysterious ways possible — through art.

Described on Facebook by its organizer, Casey Easterling, as “A group art show featuring photography, paintings, illustrations, sculptures, drawings, mixed media and other works by all vegan artists living in NYC and beyond,” this show — which runs through October 28 at the Jackson Hall Art Gallery in Midtown — features works by 19 wickedly talented artists: Antonia Barbano, Pam Curry, Alyssa Diaz, Daniel Dunbar, Shoshana Frishberg-Izzo, Danielle Geist, Thomas Good, Valerie King, Lauren Krohn, Les LaRue, Kerry Lea, Sara Pegarella, Jennifer Powell, Jody Rasch, Karen Stevenson, Greg Straight Edge, Frances Wood, Mickey Z. Zezima and Claire Zeaman. The stunning photos of the opening night, taken by Dallas Phelps, show you a bit more of how fabulous the reception was, and why you need to get your assets to midtown before this exhibit closes.

Though I won’t pretend to be that person who can look at a piece and dissect it in an intellectual or deep way that true art connoisseurs can (like my mom, for instance, proving that the apple can sometimes fall far from the tree), I nonetheless was brought to tears by much of the work, and laughter by other pieces — which, I assume, is what art is supposed to invoke.

Though all the pieces were beautiful, unique, and inspiring in their own right, I would be remiss not to mention the work that got to me the most. Dan Dunbar, co-owner of the deliciously delectable Dun-Well Doughnuts (“Artisanal Vegan Doughnuts Hand-Crafted in NYC”), who was on our podcast not too long ago discussing the vegan business that he runs with the brilliant Christopher Hollowell, had a painting that kind of made me want to commit suicide and become more of an activist, all at the same time (don’t worry, I’m leaning toward the latter — since suicide won’t do anything good for the animals). 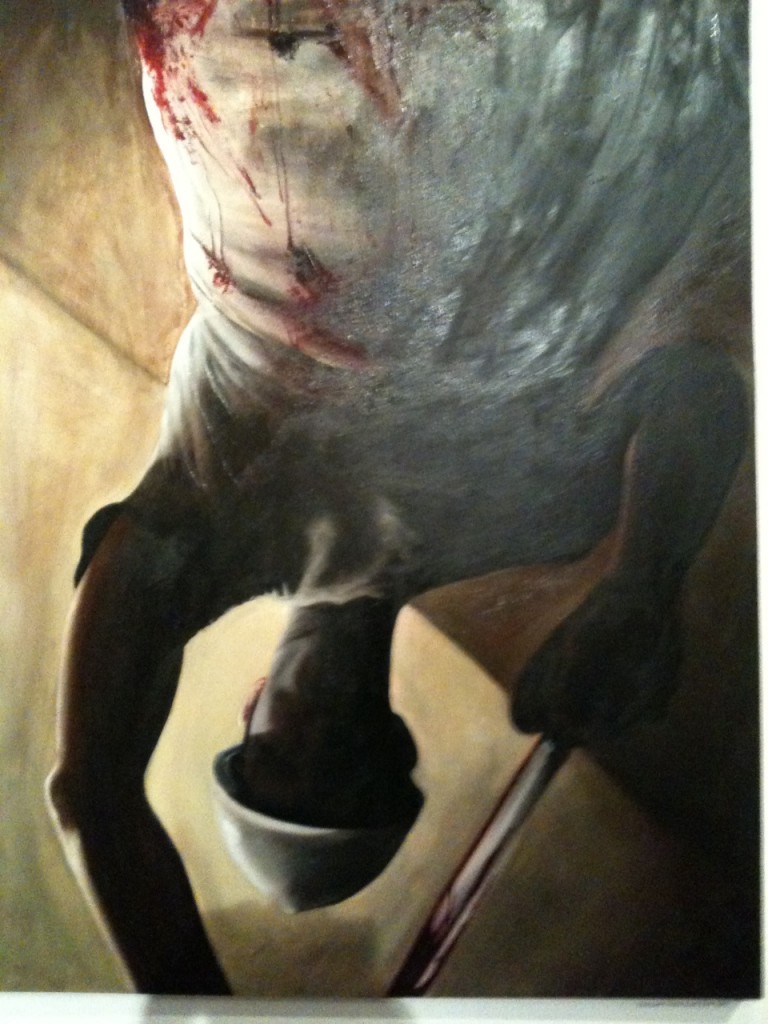 “The Last Thing You’ll Ever See” by Dan Dunbar

Entitled “The Last Thing You’ll Ever See,” Dan’s piece was a life-size painting of a butcher, seen from the eyes and angle of an animal who is about to be slaughtered. When I called Dan this morning (full disclosure: he’s a good buddy of mine, as were a lot of the artists from the show) to tell him I wanted to write about his painting, he was, in full Dan fashion, totally embarrassed and humble. “It’s hard for me to talk about my artwork,” he admitted, “because it solidifies this idea I’ve had from when I was in art school that the piece should just say what it says, and leave it at that.”

But, in true Jasmin fashion, I pushed anyway, because, as noted, I am not artistically-inclined, and I often need things explained to me outright. (Let’s not even get into Mariann’s frustration when attempting to decipher poetry: “JUST SAY IT ALREADY!,” she often proclaims.)

So, Dan continued. “My approach, not just with this piece, but with my work in general, is for the meaning to be a little bit more embedded than what’s on the surface.” Dan explained that, though we all have perceptions about what it’s like to be a non-human animal, their experiences, as in the one depicted in “The Last Thing You’ll Ever See,” are something none of us are actually privy to. He goes on: “Nobody understands what it’s like to be a pig or a cow or a chicken in these situations, but I think that everyone has empathy, and artwork in particular can be a way of allowing anyone to tap into a certain perception that is not their own.”

With “The Last Thing You’ll Ever See,” the perception that Dan hopes to get across is the very instant that is likely the most horrifying to any animal who is being sent to slaughter — the moment when death stares him or her in the eye. Fully understanding that he can’t possibly truly grasp what that moment is like, Dan said, “I wanted to make a painting that, even though it’s from my imagination… is the last thing they’ll ever see. Hopefully, it just gives people an ‘in’ to think. Even if it’s not an accurate depiction, it is giving people a way to think about what that last moment must be like.” 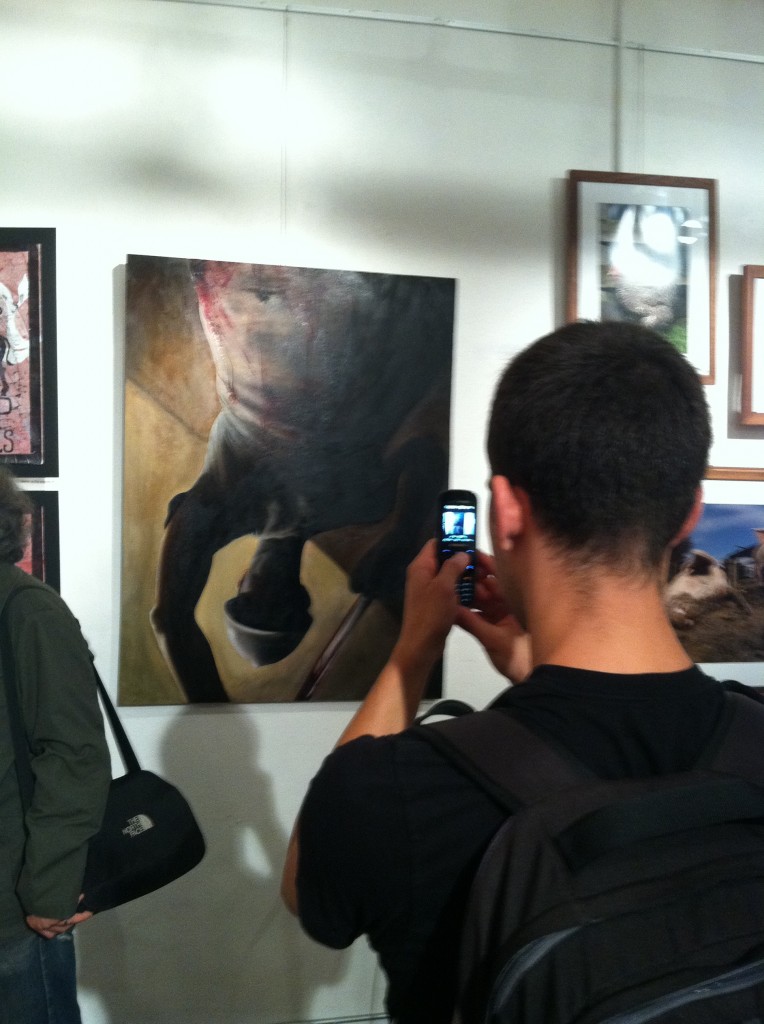 Seeing this piece in person at the Vegan Art Show, as well as the other breathtaking pieces that are part of this exhibit, is a must.

And it worked. Though I have seen countless videos of animal exploitation, read numerous books, and worked on many campaigns that have educated me about things I have never wanted to know, something about “The Last Thing You’ll Ever See” resulted in a new path to my heart — a deeper awareness of what tens of billions of precious animals go through. It shook me to the core.

What I’m learning about my friend Dan is that he might make awesome doughnuts, and he’s a darn good waiter at the West Village’s vegetarian mainstay, Soy and Sake, but beyond that, he’s got a depth and provocativeness about him, often seen in those in the visual arts. I’ve always admired that from afar. Even when I, myself, was in art school — but for performing arts — I gazed at the glass-blowers and sculptors with a kind of untouchable lust. I want that.

In a recent conversation that happened in our living room, where Dan was undoubtably petting our pit bull, Rose, while attempting to help us capture and release a determined mouse that had once again found its way to our abode (ah, New York City), he mentioned in passing an experiment (or art project? I’m not sure which) he had undertaken back when he lived in Chicago. Dan built a human-sized battery cage, found an abandoned warehouse, and sat, naked, for one week, in this cage, eating only very tiny amounts of a grain mixture. Like battery cage chickens, Dan could not extend his limbs or turn around. His only solace, he told me, was that, unlike the over 9 billion chickens killed in the U.S. every year (that’s about 286 a second), he knew why he was there, and he also had the awareness that the week would end and he would be free. Unlike egg-laying hens — who, at the end of their miserable and shortened lives are murdered — Dan would never have to experience a slaughterhouse worker looming above him, about to end his life unnecessarily so that humans could consume his body. Unlike farmed animals, Dan never had to experience “The Last Thing You’ll Ever See.”

Instead, he paints about it. And hopes that — perhaps because of his art, or someone else’s art, or a brochure, a book, a movie, a delicious vegan doughnut, or a conversation — someone, somewhere, will make the connection, will get it, and will make the noble yet obvious decision to live and let live.

Episode 89: “When one tugs at a single thing in nature, he finds it attached to the rest of the world.”