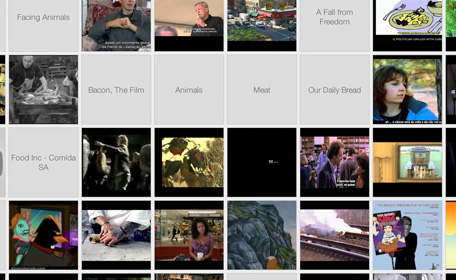 Though I have blogged in the past about video resources that bring attention and awareness to animal issues, I have never ever come across something quite as comprehensive, accessible, and just plain cool as the website “Animal Activist Documentaries.” Curated by Curitiba-based activist and documentarian Bia Dantas, Animal Activist Documentaries was created with the simple goal of “bringing together films that deal with animal issues … for academic purposes.”

As a self-professed non-academic, from my vantage point, the real power of this site is how thorough the “collection” is — offering a huge variety of films that deal with AR issues, with links to the full film whenever possible, and links to trailers when the full film is not available. The site is also set-up in a clever way, allowing you to browse the collection of movies as a flipcard, magazine, mosaic, snapshot, timeslide, sidebar, classic blog, and more. I’m partial to the flipcard view, which offers a happily overwhelming glimpse into the vast array of films that exist, all with the goal of furthering animal rights. These are films and trailers created from every corner of the planet, reminding me that not only are there tireless animal activists absolutely everywhere, but many of them are deeply creative artists, videographers, and filmmakers — fighting the good fight with the assistance of the arts.
Browsing around Animal Activist Documentaries is how I came across the short animation trailer for Tegan the Vegan, an incredibly charming “stop motion animation” series centering around Tegan, a quirky and appealing 12-year-old girl who just learned where meat comes from. According to the website for Tegan the Vegan, this show is “currently on the short film festival circuit,” so keep your eye out for it.

I also greatly enjoyed watching the trailer for Vegana, which was in Portuguese so I didn’t actually understand what they were saying — but some points are made regardless of what language you speak.