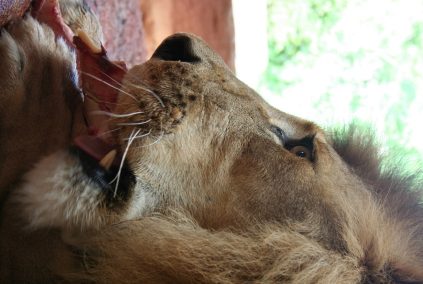 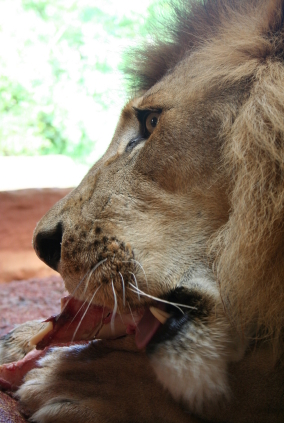 The Paleo diet’s popularity is bad news for animals. Paleo adherents avoid carbohydrates, including whole grains, and load up on protein – the more of it that is animal-based, the better (legumes are not allowed). The staples are “meat, seafood, and other animal products.”
Paleos argue that pre-agriculture hominids didn’t suffer from many modern maladies, so if we eat like they did, we won’t suffer those illnesses either. According to ThePaleoDiet.com, the avoidable conditions include:

There is only one problem with this argument: it doesn’t make sense. A few of the holes in its logic:

A more fundamental weakness in the Paleo philosophy is its reliance on a common misunderstanding of evolution. Paleos believe that whatever the earliest homo sapiens ate must be the optimal diet for us because they evolved into human beings while eating it. That might make sense if natural selection operated in the best interests of individuals and tended toward longevity and perfection, but it doesn’t.
Natural selection favors the genes of individuals who reproduce and whose offspring reproduces, and so on down the generations. It doesn’t operate in a way that would increase longevity beyond the age of reproducing and raising young. It doesn’t wipe out problems that don’t affect reproductive success, like gout or late-onset diabetes, not to mention most cardiovascular disease and many cancers, which generally kill people after their child-bearing years are over.
Evolution is not intelligent design. It cannot create a perfect gene or trait and propagate it. It can only work with the genes and mutations that naturally arise. The fact that we have a superfluous organ – the sometimes deadly appendix – is not evidence that evolution has failed us or is incomplete. It goes to show that natural selection doesn’t bring about ideal physiology, only physiology that reproduces successfully.
Evolution and natural selection aren’t even reliable at achieving that one goal. Humans still pass on genes that make their carriers infertile.
Unearthing the nitty-gritty of our evolution is not the key to living the best, happiest, healthiest lives. Helping it along is a bad idea for another reason: it maximizes fertility, and the last thing this planet needs is more-fertile humans.
The conditions we live in are much different from those of our Paleolithic ancestors, but since the interval between their era and ours is considerably shorter than the millions of years it takes to winnow out loser genes, evolution hasn’t caught us up to our new circumstances. There are countless differences between our environment and theirs – radiation, ozone, and GMOs, to name a few. Living the old way in new conditions may not maximize even our reproductive rate, much less our general health. In fact, we may need to intentionally eat differently than prehistoric people to protect our health from those different conditions.
That is what people who lived in the Paleolithic era would do in our situation. Unlike modern Paleos, they understood that diets must change to accommodate their particular circumstances. They “adapted to local environments that were regionally and seasonally variable.”
As a matter of delicious fact, people’s diets back then more closely resembled vegetarianism, according to biological anthropologist Barbara J. King. One example is grains: humans in the Paleolithic era ate them, but modern Paleos don’t.
Paleos who adopt the diet to lose weight are taking a gamble based on misinformation. To the extent that they lose weight (the evidence is not in on whether the diet promotes weight loss), it appears to be because they don’t eat processed food and sugar, not because they avoid many plants and eat hordes of animals.
As for those who went Paleo to be healthy and live longer, they are increasing the number of animals tortured in the farming system without getting any demonstrable or deducible benefit.
It’s time to end this gastronomic trend. While we’re at it, let’s get back to teaching science, specifically Bio 101.

Should We Say Good-Bye to Panda Bears?

Why It’s a Bad Idea to Get Rid of a Pet Because...

How the Government Uses Taxpayer Money to Make Dairy Seem Cheaper Than...