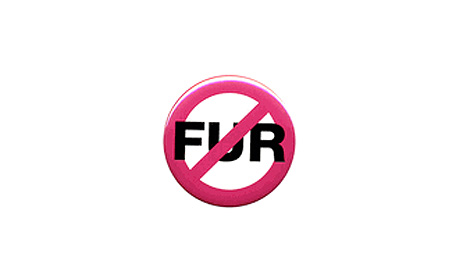 I frequently get the question, “What do you do about fur-wearers?” When we see them on the streets — which, here in New York City, is frequently — it can be devastating. I don’t know about you, but I sometimes cannot help but obsessively play the scenes of the minks or rabbits or foxes being anally electrocuted, or caught in a steel leg-hold trap, over and over again in my head. Damn those fur-wearers! It’s 2011; shouldn’t they know better already? Even if they don’t know the specifics of what happens to these poor animals, surely the exploiters who steal the animals’ fur coats know that there’s something not okay with it. 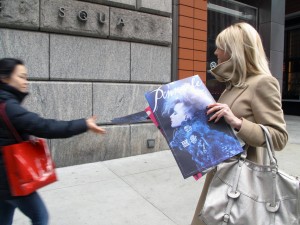 So what do we do about it? This is a question I frequently ask myself. It’s one that Joshua Katcher from The Discerning Brute has tackled right here on our blog. And this Saturday, the beautiful (in so many ways) Simone Reyes (from Running Russell Simmons) talks about her fur activism of choice on our podcast.

It’s true that when we’re caught off-guard, like when several dead animals are walking toward us on Prince Street, we — or okay, I — can on occasion behave with gracelessness. Should I put the “I’m an asshole. I wear fur.” sticker on their back? Should I tell them off? Should I scream, “THERE’S BLOOD DRIPPING FROM YOU!” Or should I politely say, “Excuse me. You’re way too beautiful to be wearing fur.” (I love that one.)

On my better days, I’ve tried honesty: Going up to someone, asking if that is real fur (though of course, even if it’s fake, it could be real — it could even be made of dogs and cats), then, when they say it is, telling them that I used to wear fur too (before I was enlightened, I had a pair of dead earmuffs), then handing them a brochure and telling them that I was pretty horrified to learn about the fur trade and I bet they will be too.

But one of my absolute favorite things to do about this kind of animal abuse — the kind that gets you at your core, and waves itself in your face as a harsh reminder of people’s ignorance and selfishness — is to channel it into positivity. 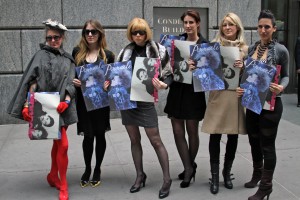 So when I heard about Pinnacle: Reinvent the Icon‘s most recent effort to combat the fur industry, I plotzed. Joshua Katcher, the mastermind behind Pinnacle — a new campaign aiming to “breathe new life and form into the original NO-FUR icon, and draw much-needed attention to the message behind” — is a compassionate genius. When it comes to effective no-fur activism, we could all learn a thing or five from his latest effort…

Last week, as NYC’s esteemed Fashion Week came to a close, and models outfitted in carcasses paraded down the runway, Pinnacle volunteers assembled in front of Condé Nast’s international headquarters, dressed to the nines, distributing Pinnacle magazines that were impressive enough to, had she been there, stop Anna Wintour dead in her tracks. The content in the full-color magazines focuses on cruelty-free fashion, educating readers about the horrors inherent in the fur industry. The pages are also filled with gorgeous models in cruelty-free attire — some touting buttons that say things like “Fur Hags Beware.” Joshua and his crew distributed 400 copies to the top fashionistas in the business, including representatives from Vogue, Women’s Wear Daily, Glamour, Allure, GQ, and Vanity Fair. You can (and should) take a look at the digital version of the magazine.

This kind of chagemaking is inspirational. It’s similar in mindset to bringing delicious vegan pizza to your office’s pizza party. If people won’t listen to our tirades, if they refuse to be reached with the truth, then it’s time we get creative. Perhaps the “lead by example” model — overtly offering ethical alternatives that they simply cannot turn down — is the right row to hoe. That could very well be the pinnacle of success.

Compassion in Action: My Internship at Farm Sanctuary (Part I)