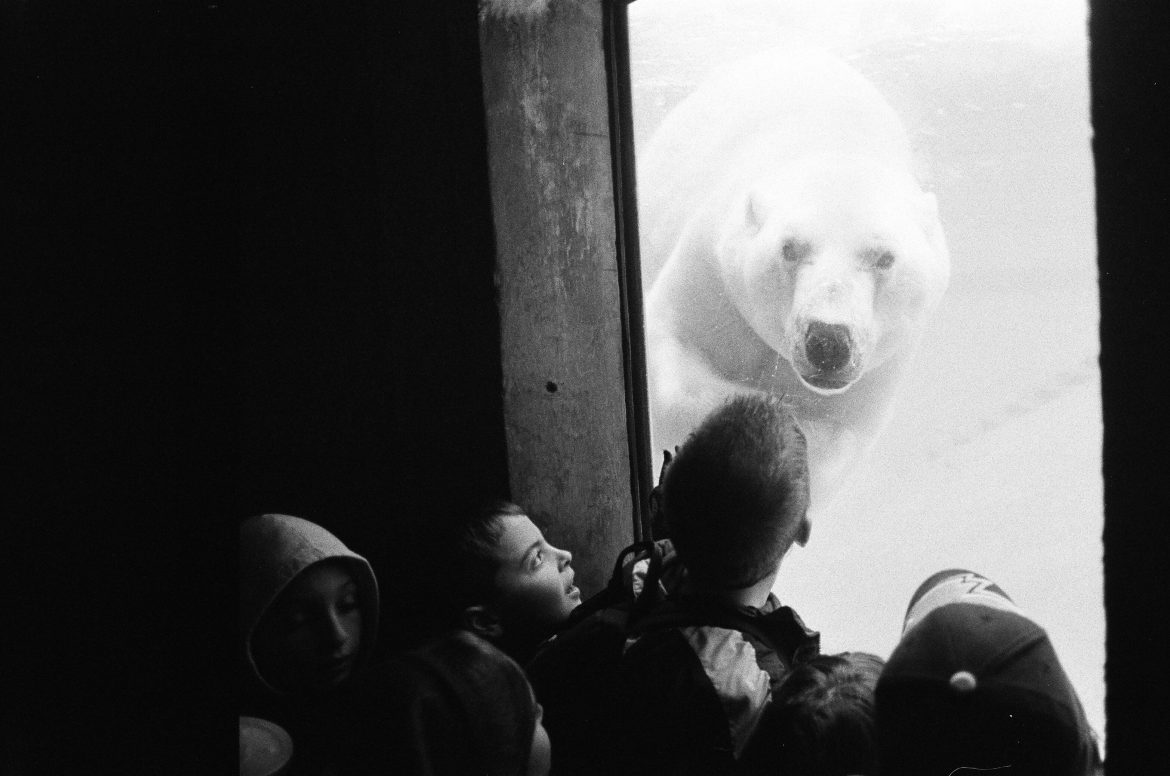 The Question of the Animal: Excerpt from “The Polar Bear in the Zoo: A Speculation” by Martin Rowe

Compassionate photographers such as Jo-Anne McArthur are changing the world by encouraging people to empathize with animals whose lives are normally hidden from view. Martin Rowe explains the power of this kind of photography in his book, The Polar Bear in the Zoo: A Speculation (Lantern Books, 2013). The book has already been reviewed by Our Hen House, and, now, we are happy to be able to offer you this excerpt.
***
The Question of the Animal
by Martin Rowe
Martin Rowe is the publisher of We Animals and the author of The Polar Bear in the Zoo: A Speculation, which looks at Jo-Anne McArthur’s We Animals series in the context of other photographers of captive animals, in particular, and philosophical speculation, in general. This edited excerpt from Polar Bear outlines Martin’s interest in JoAnne’s photography. 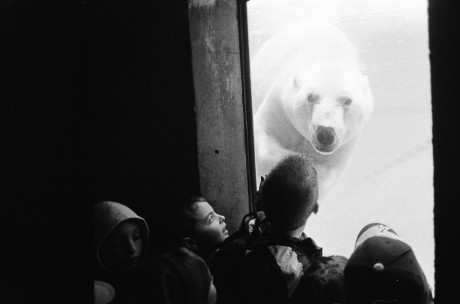 As a photojournalist, Jo-Anne McArthur sees it as her vocation to document and expose the lives, and deaths, of animals. McArthur doesn’t want to disguise the confinement of the wild or domesticated animals she shoots. Her creatures are often literally shadowed, partitioned, transected, and framed by the chains, barricades, locks, catches, racks, cages, grilles, fences, bars, and crates behind, upon, or within which they find themselves. In the case of the animals in zoos and aquaria, their enclosures may even be located next to photographs of the wild places they came from. In a couple of examples, the animal can be seen confined within an enclosure that is only yards away from the creature’s natural habitat.
To emphasize the “caught-ness” of the animals, McArthur’s photographs rarely take the form of “portraits.” The animals are often depicted off-center, shot from above or below or at an angle. These decisions suck any illusion-generating and prettifying cosmeticization from the confinement and stress how quartered (in both senses of the word) these creatures are.
As a collection, We Animals demonstrates that in their captured state those animals whom we display before visitors in a zoo are little different from those who are coerced into performing for us in circuses, are objects for our amusement in rodeos, are subject to experimentation in laboratories, or are warehoused as foodstuff on industrial farms. They all endure cramped and curtailed existences, shunted between sets of gates and pens without any agency of their own.
McArthur makes no secret that she sees her work as advocacy. Yet her photographs reach beyond agit-prop, not only because of their thematic coherence and her obvious skill at composition, but because she doesn’t seem interested in vilifying those who make money off the backs of those they exploit. McArthur’s focus is too generous and her eyes too “open” to assign blame or dispense forgiveness. She takes everything in and lays a scene before us, trusting the power of (her) artistry without feeling the need to descend to sensationalism. And, as image after image demonstrates, blame and forgiveness are beside the point, since through our patronage we’re all complicit in allowing the routine despair to continue. We co-opt and consume these creatures’ bodies and their functions; we stifle their most fundamental behaviors. We choose to look or not to look, and do nothing.
The fundamental difference between McArthur’s series and other photographers’ is that McArthur’s shows, as her title makes evident, that we’re animals, too—however we might choose to view other-than-human animate life, or honor or dishonor, puzzle over or characterize, our relationship with it. We also fall prey to parasites and sickness, are propelled by impulses encoded in our genes, and find our pursuits limited by others enduring the same conditions. We cling tenuously and compulsively to life. We’re naked and helpless when we’re born and, as the Bible notes, we bring nothing into the world and carry nothing out (see 1 Timothy 6:7). 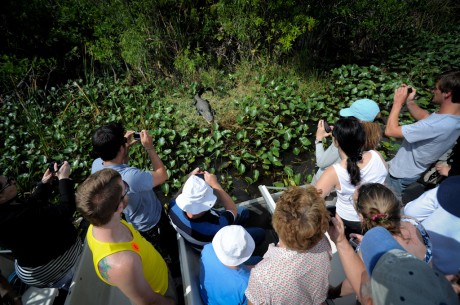 That fundamental commonality is represented visually by the fact that McArthur often places human beings within the frame. A young woman laughs in delight, unease, or embarrassment (or perhaps a combination of all three) as she cradles a pre-processed alligator handbag in her arms. A boat full of tourists, cameras and cellphones clicking, leans toward a patch of riverbank where a gator appears to shrink before their attention, the reptile’s fish-eye lens no doubt mirroring the one through which these predatory paparazzi were observed. A man clasps two chickens by their legs (a bird in each hand) to be lugged to slaughter. A tourist at a temple in Thailand poses for his friend to take a photo of him standing above a comatose, chained tiger.
These and other images taken by McArthur remind us that, for all our fascination with the beauty of our fellow creatures and our concern for their being endangered—indeed, in spite of our earnest hopes that zoos may protect these animals and ensure their continued survival—these creatures are, like the billions of creatures not in zoos, still living at our whim. McArthur’s journalism demonstrates that for all their ubiquity and our desire to see them, the animals are also perversely invisible to us and that our wish to control their behavior can also take the form of neglect. Several photos illustrate how, in spite of the allure of the animals’ pelts, coloring, and that elusive beauty, we often forget or overlook those whose lives we compulsively meddle with. They’re thrown away as trash, left neglected by the side of the road, packed into bags or trucks, or discarded in the stockyard: surplus supply to a demand that seems never to be exhausted. 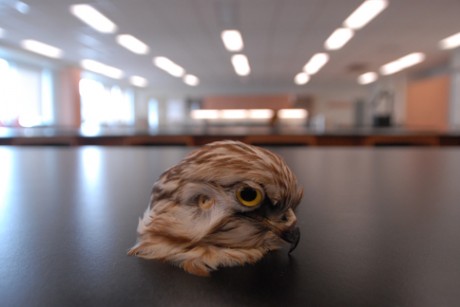 Many of the animals in McArthur’s photographs have had neither their bodily integrity nor their beauty respected—even if they’re not being used for our food or entertainment. In one arresting image, the right-hand side of a hawk’s head, richly endowed with brown-and-white plumage, stares directly at the camera. The animal seems emphatically alive and present to our look. However, it takes no more than the bat of an eyelid or click of a shutter for us to realize that all that exists of the bird is the head, which rests upon a broad, spotless table. In the background, the blurred images of desks and overhead strip lighting reveal the stage; the caption tells us that the photograph was taken in an anatomy and dissection class at Canadian University in 2007.
McArthur’s photograph is unsettling because, for all of the barrenness of artificial light, the ordered array of desks, the absence of any living thing, and the dead creature on the human-made surface, it’s impossible not to feel seen by the bird’s eye. That gaze, so piercing and so critical (!), meets our own and inquires whether we really observe nothing, nothing at all, behind the lens. McArthur’s shocking literalization of the head’s abstraction from the rest of the body highlights the artifice of the animal as emblem and illustrates our mind’s wish to reincorporate the animality into that collection of body parts, an intimate exchange that does not involve severance but reconnection.
As a whole, We Animals is a tourney replete with many gauntlets, such as the one thrown down by that decapitated bird. You are filling me with life, the bird’s eye provokes, and yet I am dead at your hands. What is it you so wanted me to reveal that you had to do this to me? In presenting such a speculation, McArthur is not allowing the viewer simply to stand back and be amazed at the sculpted magnificence of the animal’s eyes or feathers. McArthur doesn’t deny the beauty of the creatures before us. Instead, she wants us to go beyond simply admiring an animal’s exquisiteness or placing ourselves in the position of the caged cat or the roped steer, as discomforting as such empathy might be.
It’s not enough for my eyes to soften into sentimentality, as it were, or narrow into self-satisfied outrage. I’m not expected to console myself with the bromide that I could never do such things. It’s not an adequate response to be a passive observer of another being’s tragedy or to wave away any distress that might occur with the complacent observation that we’re more fiends than angels and that nothing is to be done. It’s insufficient to appreciate these creatures and marvel and rage at how endangered is this various and precious world.
The photo of the bird on the desk challenges us because it keeps on bringing us back to the eye. I know there’s no life behind the look, just as no body is attached to the head—and yet, try as I might to resist the impulse, I am every moment a Frankenstein, feverishly breathing the spiritus into the corpse, within a world of evisceration and decomposition, where my responsibility for the life and death of that creature is total. In the act of quickening lies, I believe, part of the riddle of “the question of the animal”—a question that, for me, is inseparable from the language of revelation, illumination, and, yes, discernment.
As I interrogate the subject, I’m aware that by asking the question of the animal I must in some way confront the dead-alive creature and ask that question of him or her—with all the foolishness and potential exposure, that combustible mixture of threat and connection, that the inquiry might throw up. Why should we continue to seek more information from a source that may be unreliable? Wouldn’t any question simply be a projection onto a mirror that ultimately reflects only ourselves and does not reveal the animal who stares back at us? Why not conclude that the animals’ silence, their “cut-offness” and otherness, are reasons enough for us to deduce that we can learn nothing of any value from them, and that our questioning is merely another way of talking to, and about, ourselves? 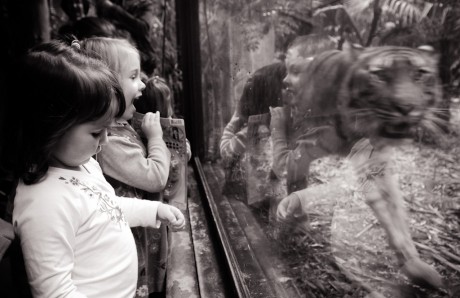 Tiger on Display at the Melbourne Zoo, Australia, 2010. By Jo-Anne McArthur.

The obvious response is that, for as much as we may want to dismiss the question of the animal, we keep on coming back to the liminal glass-frame to stare into it. The open-endedness of the interrogative—the question of the question—and the unstill self-reflexivity and projection of our consciousness worry and fascinate us. Our eyebrows rise and our eyes open wider: perhaps in wonderment or credulity, horror or disbelief or realization, or maybe all simultaneously. Tell us who and why you are, we address the lens within the face, so that we may know who and why we are.
“The question of the animal” not only asks us what we mean when we talk about an animal but what or who we talk about when we refer to the animal. Is there something that we could define as animal, by which implicitly we draw a distinction between that thing called animal and that called human? And if we were to ask “the question of the animal” are we not opening ourselves to the possibility that the animal—whatever or whoever that might be—in turn is asking a question of us? And what might that question (or those questions) be? And were we to respond, how would we do so in such a way that the answer would be, at the least, sufficient to the weight of the question?
***
The Polar Bear in the Zoo: A Speculation is available as a printed work, an audio book, and an e-book on Amazon.com, through www.lanternbooks.com, and other vendors.
Share 0 FacebookTwitterPinterestEmail
previous post