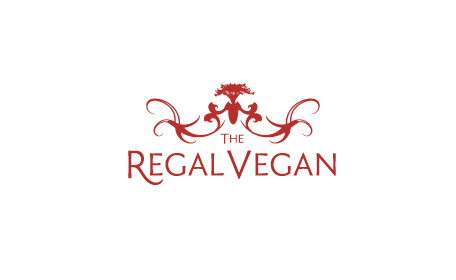 Back in 2010 when we first published this spotlight on the fabulous Ella Nemcova, her company The Regal Vegan had only just launched with a couple of animal-free pates, including her infamous Faux Gras. Since then, Ella has expanded her product line, begun to offer catering and nutrition workshops, and even appeared on the very first episode of the Our Hen House TV show! So, take a stroll down memory lane with everyone’s favorite vegan monarch on this #ThrowbackThursday.
This article originally appeared on Our Hen House on August 26, 2010. If you’d like to see a certain OHH article resurrected, email us at info [at] ourhenhouse [dot] org.
***
“Regal” isn’t the first word people usually associate with vegans, but it certainly is the most appropriate title for Ella Nemcova, a.k.a. The Regal Vegan. Ella, the creator of the decadent-tasting (but good-for-you) lentil and walnut paté, Faux Gras (which we also reviewed on a recent episode of our podcast), is a caterer, holistic health counselor, entrepreneur, and, as you’ll see, business mogul. All in all, a nice package — particularly when the product is vegan.
All too often, it can seem so unattainable to translate a brilliant idea into a successful business, but Ella proves that with some creative thinking, it’s possible. She’s a regal vegan who took her talent, then added some training, ingenuity and old-fashioned elbow grease (plus a little help from her friends on Facebook), and voilà, her activism became her career, one compassionate bite at a time.
Plus, how can you go wrong with something called faux gras? It’s a cruelty-free alternative to foie gras, which literally means “fat liver” — no kidding! — and is made by force-feeding geese and ducks through a tube.
The Regal Vegan herself agreed to share her story with us.
***
Our Hen House: When did you become vegan, and can you tell us a bit about your journey getting there?
Ella Nemcova: My journey to become vegan started with an actual journey. In 2005, I left my career for a year-long, Eat Pray Love-style trip around the world. When I returned, I underwent a strict gluten-free vegan cleanse. I had seen so much of the world thrive without eating animals, it suddenly seemed possible. I was exposed to so many amazing dishes that were animal-free; in India, Asia, even in Russia and Italy. Then on my cleanse I cut out everything except fruits, vegetables, beans, grains, nuts and seeds. I cooked and experimented till I had a book full of amazing recipes inspired by my travels. I was also doing lots of yoga and really felt that mind/body connection. I felt great and thought, why would I eat any other way again?
I soon went through training as a Holistic Health Counselor, and started doing workshops about healthy eating. I teach people from all walks of life how easy (and economical) it is to eat healthy. Essentially, I was presenting a “plant-based diet” but not calling it vegan, which is the acme of this diet.
OHH: Did you always know you wanted to work veganism into your career? What other jobs did you have before The Regal Vegan?
EN: I used to work in advertising – I watched how big business sold horrible, artificial things to people and thought, wow — if only we could use our persuasive powers to do good instead of selling corn syrup, chemicals, and false “good ingredients.” I knew I needed to do something with a conscience, but I didn’t know what yet.
OHH: When did you first get involved in vegan activism?

EN: It’s funny, Rory Freedman is the sister of one of my dearest friends, and we would hang out and cook together because, naturally, the three of us love to eat. She was the first person I ever veganized my recipes for. I remember hearing her rant about veganism and thinking it was so extreme. I was eating organic, very low on the food chain, and had started doing vegan cleanses a few times a year, but I couldn’t quite go all the way. When I did that cleanse after returning from my soul-seeking journey, something clicked. A lot of what Rory said resonated. For one thing — you feel SO GOOD eating this way! (Especially when you stick to non-GMO soy and whole foods). Not only in the body, but in your conscience. The concept of Ahimsa became clear to me. Hurting people is violence. And eating animals is violence. To boot, it is severely violent to our one, precious planet.
I knew that my path to vegan activism had to come from a different place than most activists. Preaching ascetism wouldn’t work for the majority, and we need as many people as possible to stop abusing, torturing and eating animals. My marketing background had showed me that to get converts, you had to build a bridge to non-vegans. A delicious bridge. My mission became to make vegan food not only more accessible, but ridiculously delicious. Honor people and their palates. Then give them a pamphlet. 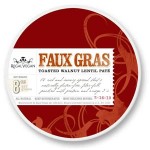 OHH: How did you get the idea for Faux Gras? Why did you choose this name for the product?
EN: I had been making this “walnut lentil paté” based on ones I had tried, and I started to experiment. I wanted to make something more akin to the kinds of foods I ate growing up in a Russian-Jewish household. I was running the Regal Vegan catering business, so I got to experiment all the time. I  started making this paté as part of an elegant 3-course dish called “The Anastasia,” which is a Russian-Princess-inspired dish. My clients raved about it, and got me thinking that I needed to make this available to more people. The name choosing was a modern-day phenomenon; I asked a bunch of friends on Facebook to help me come up with a name. When I saw the words “Faux Gras,” I knew we were done.
OHH: Please tell us how you brought this product to market. Many of us have good ideas for products or services, but it seems too complicated and expensive to actually make it happen.
EN: Since I was already catering, I was familiar with some of the requirements of the food business. However, food manufacturing is quite different. So, I took classes, read articles, asked everyone I knew, and read everything I could. I went to a few shops in my neighborhood where I was a regular customer, and asked if they would be interested in selling it. Also, I shared tables with other food manufacturer friends at food markets just to see how it would sell. Once I saw the reaction, I booked a shift in an incubator kitchen and made a big batch. I brought it to stores, followed up, and started exhausting my credit card to cover the start-up costs.
OHH: What plans do you have for The Regal Vegan in the future?

EN: I’m developing a killer new spread for now (should be out by Christmastime!) and am laying the plans to bring a whole line of decadent vegan foods to market. I keep toying with the idea of a storefront, but in the meantime, more Regal Vegan products are coming your way. I’ll be looking for royal tasters too, if anyone is interested.
Thanks, Ella. And, yes, we are interested!
***
Share 0 FacebookTwitterPinterestEmail
previous post

Kick Off Pride the Vegan Way! Join the Hens and the Vegan Mos on 6/26 in Brooklyn!

Episode 281: “To understand biology is to understand that all life is linked to the earth from which it came…”

Keep Vegan Indie Media Alive! Your Support of Our Hen House Will...