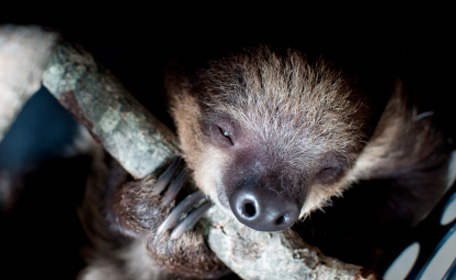 Have you heard? The sloths are coming, and we at Our Hen House could not be giddier about it.

Here’s the short version of how this venture started: Writer and filmmaker Lucy Cooke fell in love with Taz, a baby sloth who (get this!) she first learned about while watching a Youtube video! So Cooke traveled 5,000 miles to Costa Rica to meet him, which is when she got to witness, first-hand, the extremely touching stories of the world’s only sloth orphanage. According to Cooke, as reported on her website, at this orphanage, “Orphaned baby sloths whose mothers have been zapped by power lines or hit by cars are brought to the sanctuary to be cared for by legendary sloth whisperer Judy Arroyo.” Inspired and moved (duh!), Cooke made a short video called Meet the Sloths, which immediately became a huge success — so much so that it was covered in major media outlets worldwide, including making it into New York Magazine’s much revered “Approval Matrix.” The next steps for Cooke in her quest to raise awareness about these glorious (and off-the-radar adorable) sloths was clearly a book deal (hello, Simon and Schuster!), and a full-length documentary based on her original short video, which is airing on Animal Planet in the United States tomorrow, Saturday, December 17, at 8 p.m. EST. 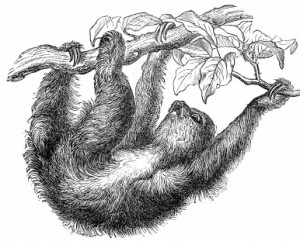 Is this an Our Hen House dream story, or what? Here you have a woman who was touched and moved by an animal story, so she took it upon herself to create smart, independent media about it. Awareness was raised (um, understatement of the year), the media caught on, and now, I’d imagine that The Sloth Sanctuary in Costa Rica will have a few donations coming in for the holidays (speaking of which…). And, most importantly, people (like me!) are learning about these precious creatures (prehistoric sloths stood up to 7 meters tall!). By the way, if you’re starting to think about your 2012 vacation, you might consider offering your services at the sanctuary’s volunteer program, which provides both room and board (not sure about the veganness of it, but obviously if they’re not there yet, that’s obviously something that you could bring to your conversation with these sloth-heroes).

Check out the trailer for Lucy Cooke’s sloth documentary… But make sure you turn your computer’s cute-meter off, because the needle might break your screen:

Vegan Cookies and Almond Milk for Santa: Making the Most of the Holidays

One Step Closer to Feeding the World