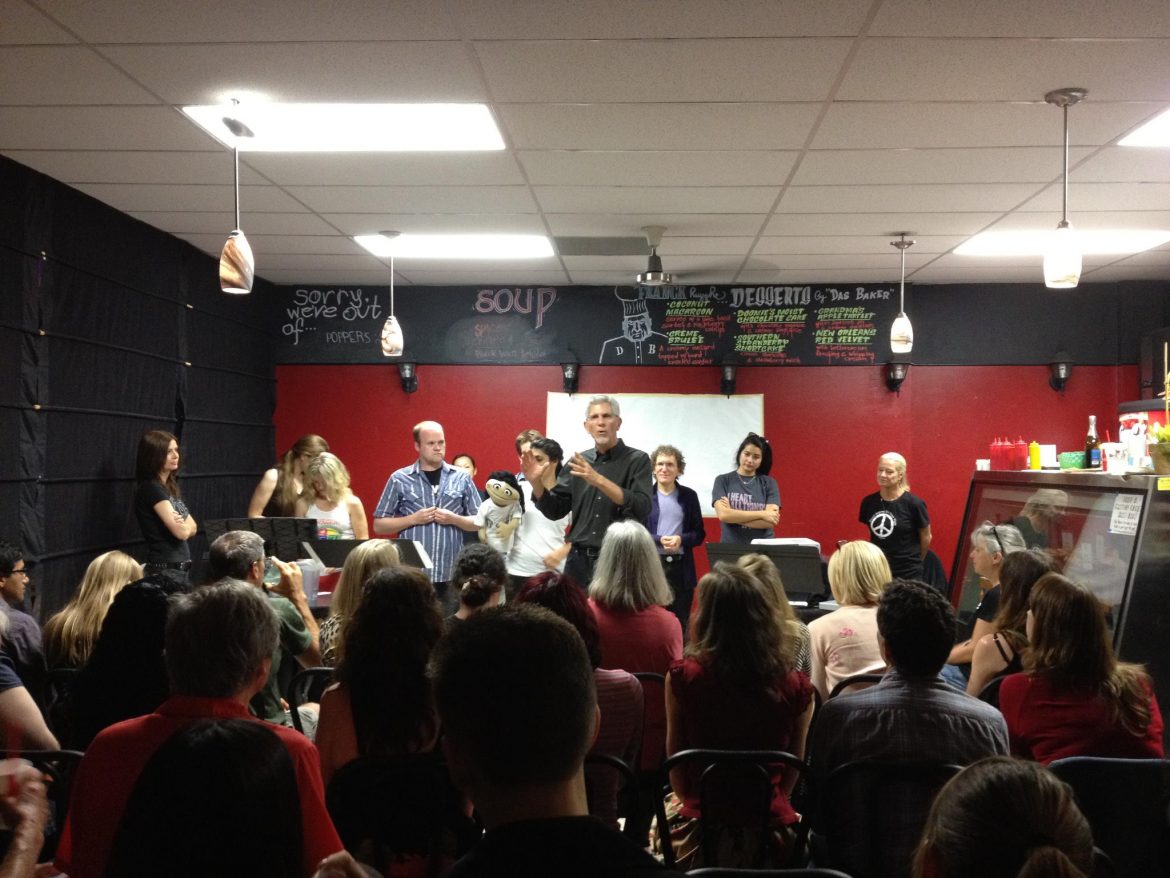 “The Veg Monologues”: A Stage Show With a Bit of Humor, a Heap of Conscience

We can all relate to being in a circle of comrades when someone begins to tell their “how I went vegan story,” and, soon enough, everyone takes their turn. (As a lesbian, let me tell you, this is not incredibly dissimilar from a group of LGBT folks sharing their “coming out” stories. At some point, at some party, or some gathering, it comes up.)

Robb Curtis dreamed of taking that process one step further. When he decided to move forward with his pipe dream of compiling and producing The Veg Monologues: Vegan Voices, his first order of business was to interview vegans he knew in the Los Angeles area, asking them — as he puts it — “to talk about their pivotal vegan moment.”

One thing that I would likely not anticipate when asked to share my vegan story, is that it would wind up in a book, let alone a produced play. For a lot of people, even having their “huge gestalt shift” commemorated on a website seems otherworldly. And yet memorializing these moments — in fun, funny, heartbreaking, poignant, thought-provoking ways — is exactly what Robb decided to take on. And once he zeroed in on the specific goal of staging a theatrical production, the first leg of The Veg Monologues was under way. “I wanted to take people on a vegan ride, with ups and downs, funny and sad, and presented so that the audience would be entertained as well as informed,” Robb told me.

His own journey to veganism was one that Robb knew he wanted to include in the manifesto. “The process of writing my own three monologues — Growing Up, Vegan Love, and Keeping Hope Alive — was a cathartic one,” he said, “especially with the last one, as it deals with the death of my wife. It became evident that these stories would form the core of the production.” Additionally, three of the monologues Robb created are fiction. Beyond those, though, the rest of The Veg Monologues are virtually verbatim testimonials, either transcribed from his original interviews with L.A. vegans, or obtained from written personal accounts (there is, of course, light editing involved to help shape the story).

Last May, Robb’s dream of having a stage production of The Veg Monologues was realized, during a one-night-only performance held at a vegetarian restaurant in Hollywood. “Seventeen monologues were delivered by eleven people, mostly non-professional actors, all but two of whom were vegan,” he said. One of the performances even included the use of a professional puppeteer. “Only three of us told our own stories,” he continued, noting that the rest were actors. “I, of course, performed my personal monologues, Patty [Shenker] did hers, and and another woman, Lesa Miller, presented her own heart wrenching story about a traumatic deer hunting incident.”

Robb’s next dream is to move The Veg Monologues from a restaurant reading to a full-fledged stage production, and his eyes are open for interested producers and directors. In order to keep the support and buzz for this project alive, Robb intends to present a “sampler” version, along with a few fellow performers, at college campuses and vegan gatherings. There is also interest from a vegan filmmaker (who was in attendance last May) to make a short film version of one of the monologues — Slaughterhouse of the Soul.

Much like stories of coming out as queer, there is a lot of significance when vegans “come out” as vegan. It begins to normalize the worldview of compassion to all, putting a face, name, and story to what, for many, is still a foreign, radical concept. To that end, Robb is currently seeking your vegan enlightenment story for The Veg Monologues.

For those of you hoping to become a Broadway star or a Pulitzer Prize winning playwright, do note the tiny print on the website:

Stories that are posted on this blog may or may not be included in future productions of  The Veg Monologues: Vegan Voices. No guarantee is made that  your vegan story, if posted, will be used in the production.  By submitting your story, you agree that, if it is used in a future production of The Veg Monologues: Vegan Voices, it may be changed or edited in any way befitting the show; you do not have ownership of that story within the context of the production; and you will not receive any form of payment or privilege for the inclusion of your story or any part of your story in the show, beyond being credited in the production’s program.

And for those of you looking for a good, quick read, remember that you can take a look at the pieces on The Veg Monologue’s website. A particular favorite piece for me, naturally, is Coming Out, by Robb Curtis himself, which is a humorous (and all too real) fictional account of coming out as vegan and gay in one fell swoop. Here’s a snippet:

Now,  it’s hard to read my mother’s face but she certainly doesn’t look horrified.  And then she says, “Larry . . . we all had that figured out years ago, darling.  Tell me, this Richard fellow, is he a nice boy?”

“Yes,” I blurt out before she can continue,” yes, we both play safe.”

“Well, alright, then,” says my mother.  “But if he’s such a nice Jewish boy, I don’t know why he would  want to go and turn you vay-gan!”