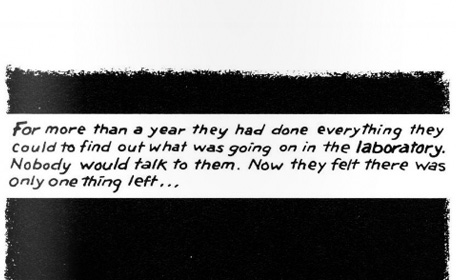 Though, like many of you, I read Peter Singer‘s game-changing book, Animal Liberation, early on in my animal activism, for some reason, it was only recently that Animal Liberation: A Graphic Guide (published in 1987 by Camden Press) came across my radar. Co-authored by the brilliant philosopher Lori Gruen, A Graphic Guide details not only “What we do to animals” (Chapter 3) — including issues such as experimentation, exploitation of wildlife, and factory farms — but it also guides us through “What we are going to do about it” (Chapter 4) — which is my favorite part of my new (old) 159-page inspiration. The Guide will also give you a thorough glimpse into the history of the animal liberation movement, and the very roots of the idea. For example, there were the Jains:

Concern for animal suffering is not new. Developed around 1500 BC, the most ancient of all works of philosophy and religion, the Indian Vedas, denounce meat-eating because of the injury and death it brings to animals. The religion of the Jains, which dates from about 500 BC, teaches that non-violence is a guide to all morality. Jains are often ridiculed by Westerners for the care they take to avoid injuring insects of other living things while walking or drinking; but they also looked after sick and injured animals thousands of years before animal shelters were thought of in Europe. 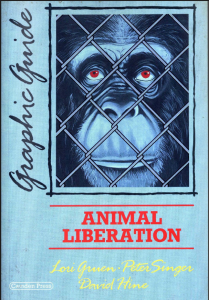 But beyond containing page after page of insightful and accessible commentary, A Graphic Guide is unique in that, well, it’s graphic. Illustrated by British comic artist, David Hine, the serious subject-matter is laced with page after page of cutting-edge, thought-provoking, sometimes emotional, and always informative (not to mention tattoo-inspiring) illustrations. According to the website Conflict Gypsy — which offers an e-version of Animal Liberation: A Graphic Guide, for free — following his work on this book, Hine’s career went on to include drawing or contributing to comic series including Transformers, X-Men, Spiderman, and Batman and Robin. Conflict Gypsy goes on to say:

Hine’s impressive career explains the comic-book esque structure of the guide as well as the absolutely amazing skills on display. Twenty-four years later and there is simply no comprehensive visual rival to the work of this guide. Conflict Gypsy is beyond excited to host this publication here, to trace and celebrate it’s influence, and to hopefully inspire all of those illustrators/designers/drawists out there currently fighting for animal liberation.

I’m somewhat embarrassed that it has taken as long as it has for Animal Liberation: A Graphic Guide to wind up as part of my library — an integral part, already — taking up elite nightstand space, along with Gruen’s latest, Ethics and Animals: An Introduction (which we reviewed). Though A Graphic Guide was written 25 years ago, much like Animal Liberation, the ideas, theories, and (most of the) information presented in it have not gotten old. After a thorough history lesson, and a look into the hideously ugly underbelly of various animal exploitation industries, while discussing “What are we going to do about it?,” the authors present an action-oriented plan, which calls on each one of us to change the world for animals. The suggestions, which are fleshed out in the book, include: shift to a cruelty-free lifestyle; flex your consumer muscles; spread the word; do your homework; choose your target (or campaign) carefully; set attainable goals; and vary your tactics.

There are parts of A Graphic Guide that gave me no choice but to picture Gruen and Singer, megaphones in hand, feet firmly planted, righting the wrongs of this troubled world. Here’s one such part:

The agribusiness corporations which profit by exploiting calves, pigs and chickens don’t need your approval; they need your money. The purchase of their products is the only support they seek from the public. As long as they continue to get it, they will have the money and the political muscle to be able to say to their critics: ‘We are only providing the public with the goods it demands at the price it is prepared to pay.’ And they will be able to tell their shareholders that agribusiness is a good investment.

According to Conflict Gypsy, Animal Liberation: A Graphic Guide is “lesser known but still influential.” Though I’m willing to accept that it’s only me who missed the memo on this book, I’m horrified that I have. Don’t follow in my footsteps. You can get a copy (new or used) on Amazon, or, if you’re into free things (ding ding!), don’t miss Conflict Gypsy’s e-version.

Speaking of Lori Gruen and Peter Singer, don’t miss either of their recent eye-opening interviews on our podcast. On Episode 105, Gruen enlightened us about everything from chimpanzees, to teaching animal ethics, to her feelings regarding the prevalence of women in the animal protection movement. And on Episode 100, Singer (no relation to me, though I pretend otherwise) talked to us about his views on the current state of the animal liberation movement. (He also joined us way back when during Episode 36, where he got down to basics, discussing why he thinks animals are important.) Don’t forget that you can easily access our podcast via iTunes.

Below are some images from Animal Liberation: A Graphic Guide, illustrated by David Hine, that make me want to sing and cry, simultaneously. 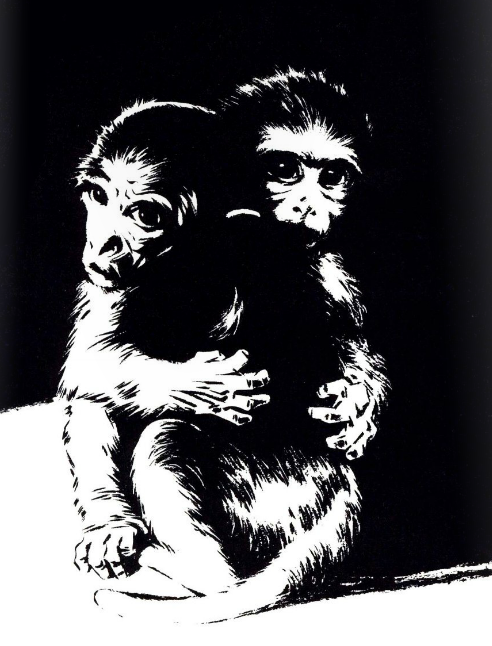 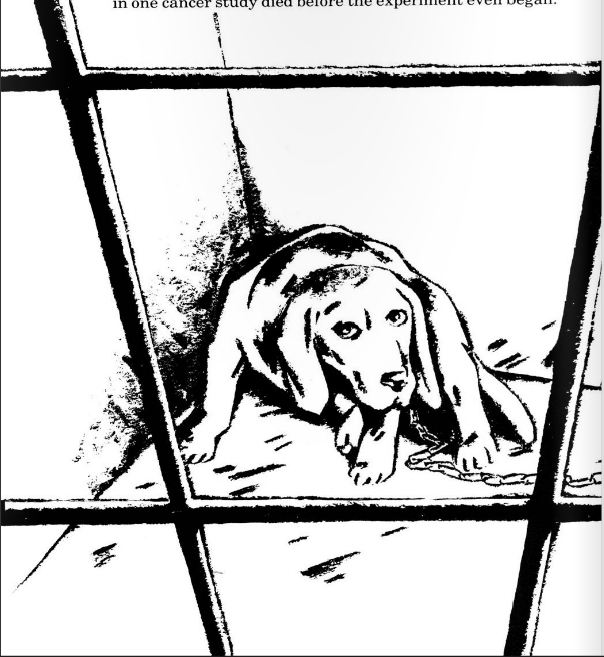 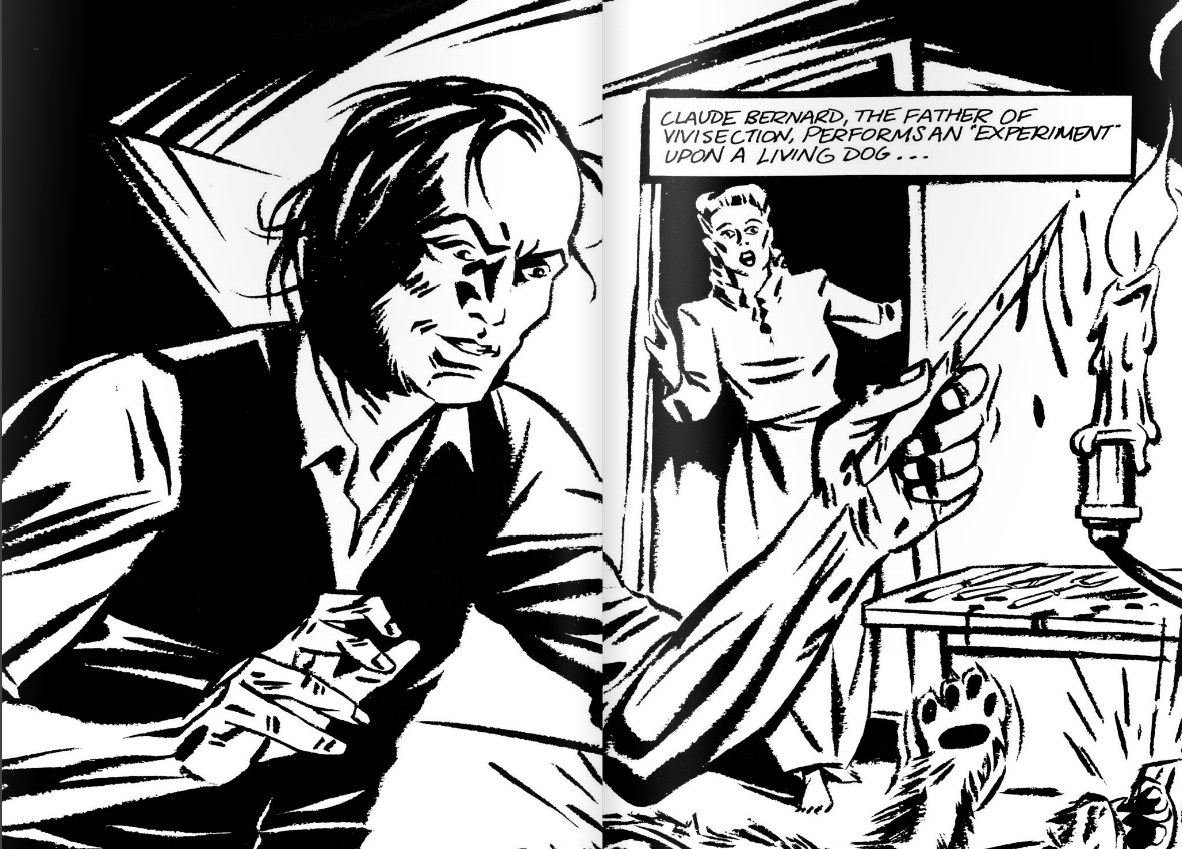