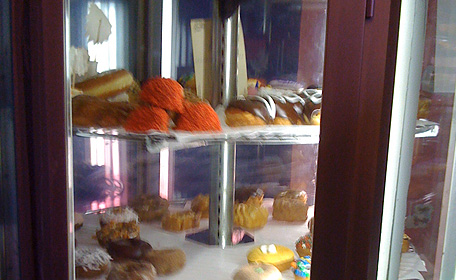 As part of my eating tour of Portland, I (of course) stopped at the amazing VooDoo Doughnut (“the magic is in the hole”). Directly next to a strip club, and in an area that made this long-time New Yorker tightly grasp onto my wallet in my coat pocket, VooDoo Doughnut is a world-famous (well, okay, maybe just really well-known in certain circles) place, which, in addition to the “regular” (oppressed) variety of doughnuts, has a huge selection of vegan ones, too.

And they are like none other. I’d kind-of like to equate them to the Dunkin’ Donuts that I used to eat when I was a kid growing up in central Jersey (not too much more to do there besides go to DD and go bowling), since they are sugary and frosting-y and just over a dollar (!); but they are better than that. I had the “Portland Crème,” which, it should be noted, had really-a-lot-of-crème, chocolate frosting, and just a tiny bit of god. 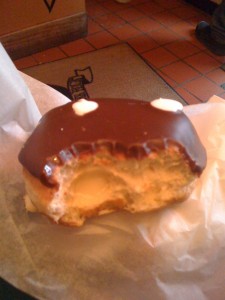 Lots of doughnut-craving vegans go to VooDoo Doughnuts. We also go to Mighty-o (totally vegan selection) in Seattle or Ronald’s (mostly vegan selection) in Las Vegan…I mean Vegas. (The ones at Ronald’s, by the way, made me a better person. I left so elated that the money I lost in the casinos was all-but-forgotten.)

Or, if you have a stubborn “I’m-not- going-to a vegan-restaurant, dammit” family, you can take the curmudgeons to a restaurant within a restaurant, order the best thing on the menu, and let everyone have a bite. Or, better yet, encourage them to get chicken parm – just don’t mention that the “chicken” and “parm” are made of soy. Heh.

By the way, the impactful animal advocacy group, Compassion Over Killing, currently has a campaign asking Dunkin Donuts to take out the eggs and dairy.