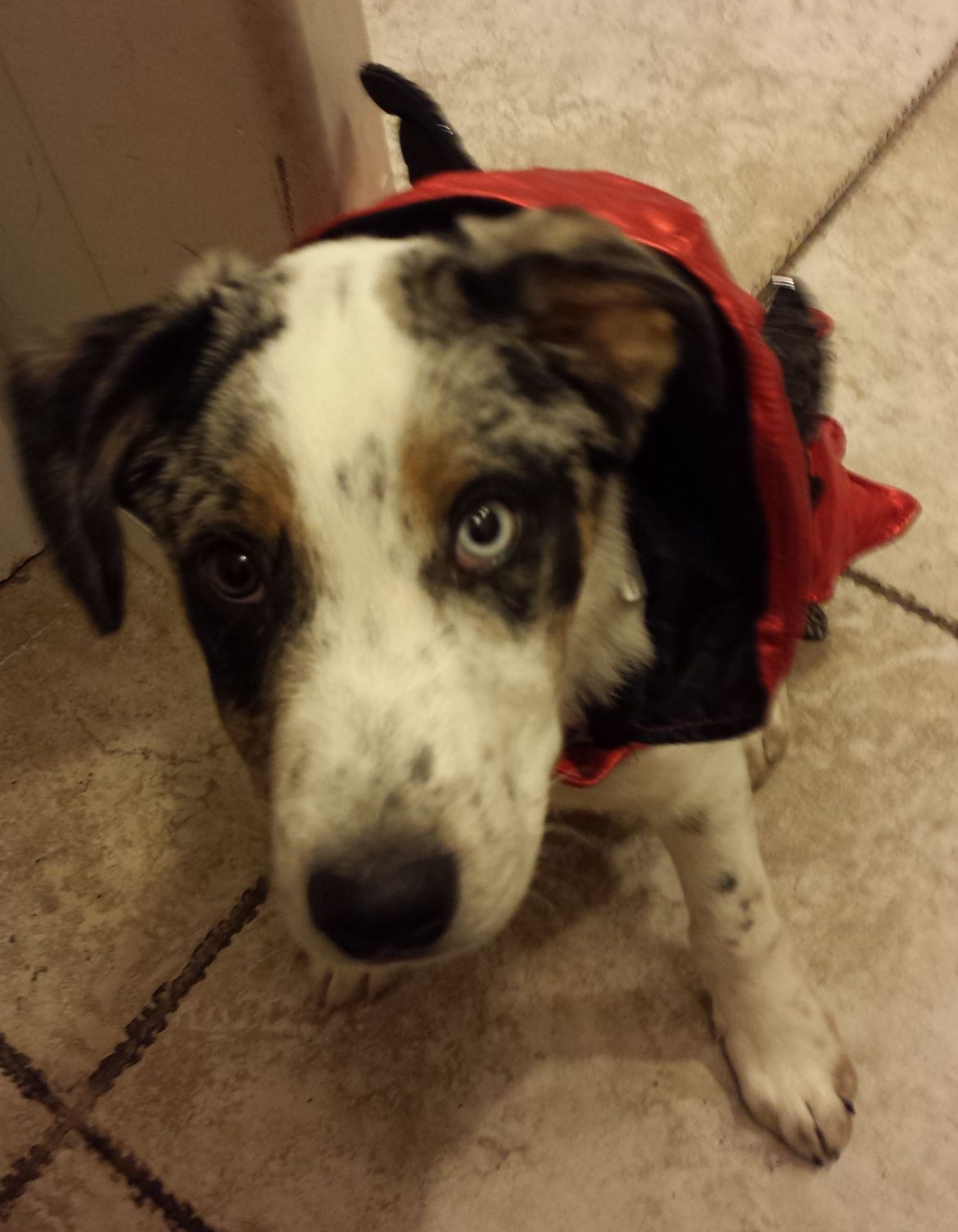 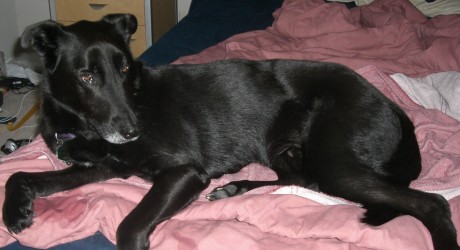 A few weeks ago, Mariann had the opportunity to speak at Cornell Law School as part of the book celebration for Sherry Colb’s Mind If I Order the Cheeseburger?: And Other Questions People Ask Vegans (don’t miss Piper Hoffman’s review for OHH, and be sure to hear Sherry’s interview on our podcast, if you haven’t already). In addition to being involved with a spectacular event for one of the most important books for our movement, our trip also gave us the distinct pleasure of sharing a meal with her inspiring and loving family — her husband Michael Dorf, and their two daughters — Meena (age 11), and Amelia (age nine). (I should mention that it seems Meena and Amelia are officially the youngest regular podcast listeners we’ve got, and it was kind of amazing to sit beside them during a lovely Hanukah meal. They even gave me chocolate gelt!)
I should have known, going into it, that geniuses like Sherry and Michael would be raising two compassionate, articulate, brilliant kids. Amelia and Meena are passionate vegans, eager to share their worldview with anyone who asks (or who happens to be sitting next to them). While I was sitting in between them at the dinner meal, the two of them chatted musically about who in their lives is vegan, and who is vegan because of their influence. The list is not short. These are, it seems, among the very kids who can change the world for animals. Between that and having 12-year-old Rose McCoy on our podcast a few weeks ago (and after she then went on to crash the Macy’s Thanksgiving Day Parade in order to bring attention to the plight of animals at SeaWorld), I have no choice but to end 2013 a hair more hopeful than I ended last year. These kids are making me feel grinch-like …
Anyway, if you can’t exploit your friend’s children (for the sake of the animals, of course), then what’s the point of having friends with kids? Just below, you’ll find a portion of term paper about turkeys that 11-year-old Meena wrote for her class last year, when she was in fifth grade (this year, she wrote about the horror inherent in the dairy industry). Just beneath that is her nine- (excuse me, and-a-half) year-old sister Amelia’s thoughts on animal abuse — which she prepared just for us.
In addition to making you feel verklempt and inspired, I would guess that Sherry and Michael’s kids might also teach you a thing or two (as they did me) — about turkeys, about communication skills, about happiness …
***
“On Turkeys” by Meena Colbdorf (written last year, when she was ten) 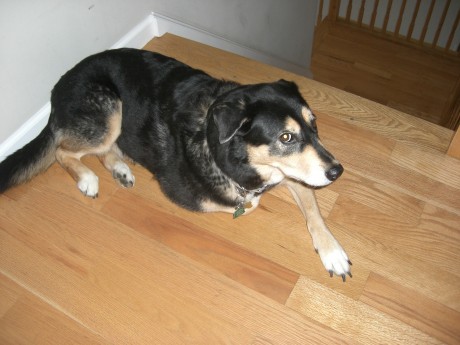 The way people raise turkeys on farms is really cruel to the turkey. Turkeys are expensive to raise because people have to fatten them up before they can kill them. […] Turkeys are housed in huge warehouse buildings holding thousands of birds each. Factory farms can hold twenty five-thousand birds in one shed. In just the U.S. alone three hundred million turkeys are slaughtered annually. […]
Some turkeys are sold as “free-range” birds. This may sound humane but simply “free-range” means able to access the outside according to the USDA rules. These birds rarely see the sunlight or feel grass and dirt. Because of huge changes in their body structure, many domestic breeds can no longer perform their natural behavior. They cannot roost, and mature factory-bred turkeys cannot fly and cannot naturally reproduce, so they are artificially inseminated. Industrial turkeys are prone to heart disease and heart attacks when they are stressed out, and they often have arthritis as they age. Some get arthritis when they are as young as one month. Turkeys are housed so close together that farmers perform three procedures on them to make raising them easier.
These [procedures] often take various body parts off because the turkeys can fight and get injured, and wounds become infected. Because of over-crowded conditions, the birds often fight, pick at each other’s feathers, and even eat each other. To prevent this from happening, the farmers de-toe, debeak, and de-snood the turkeys without anesthesia. When people de-toe turkeys, it causes injury in the joints, and arthritis. The balance of the turkey is thrown off by de-toeing. Calluses form when turkeys walk on the wrong portion of their pads; it leads to pressure sores. De-toeing also avoids injuries to the hens during mating, they say, because turkeys do just fine mating in the wild. Many of the nerve endings are in the beak, making it hard to use their beaks for eating and picking things up. Debeaking does this to turkeys. Farmers use two different debeaking methods. They have the hot blade debeaking method, and the microwave debeaking method. To prevent frostbite and fighting, they usually rip off the turkey’s snood at one-day-old. Farmers should not do this to turkeys because all it is doing is making the turkey’s life harder. Turkeys deserve respect. All of these birds make up a great big happy family.
It is clear that turkeys are intelligent birds. Now you know all the unique ways turkeys live. I think turkeys are kind and special birds and I hope that the next time a person has turkey on the table you should think about what you read and make a different choice. Turkeys are very beautiful creatures. But beware, they are really loud. They are really fun to play with and very soft. These marvelous birds have been in the wild for thousands of years so lets all try to keep them in the wild for a really long time.
***
“Oh Happiness” by Amelia Colbdorf, 9 and a half years old 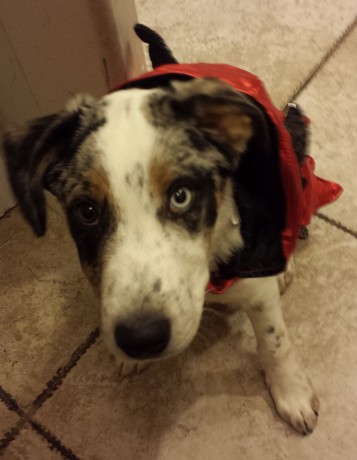 So first off, I am honored to be writing something that’s going on Jasmin Singer and Mariann Sullivan’s website — but nobody wants to hear that, so here’s something you might actually like:  I am currently 9 and a half years old and living in Ithaca, NY in a loving, supportive vegan family, including my dad Michael Dorf, my mom Sherry Colb (you probably know who she is), my sister Meena Colbdorf, and my 3 vegan dogs — Blue, age 5 months, Cody, age 6 years and Sheyna, age 8 years.
I think that you would definitely not want to live in a life where you have to have family taken away not long before you are slaughtered, and later that day you’re on a dining room table with olive oil and paprika drizzled or sprinkled onto you, or you are being fried for a BLT. Either way you’re not happy.
Now you may think this is a complete waste of your time, but I assure you that you’ll get something out of this. I am proud to say that if you are not vegan now, it honestly isn’t hard at all. As you may know, this is not an overnight process for most people, and if you want to learn more, there are plenty of resources.
I hope you enjoyed.
Share 0 FacebookTwitterPinterestEmail
previous post