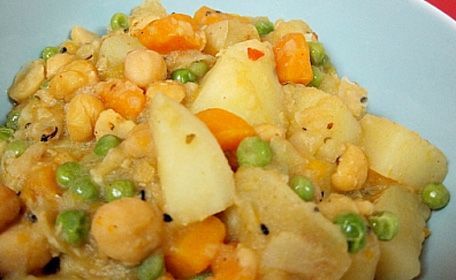 Vegan food blogs are obviously a very popular trend these days, and that’s a good thing. Just by googling “vegan food blog,” I came up with over twelve million results. That’s a lot of tofu.

From time to time, we will feature vegan food blogs we fancy, or ones that are doing something particularly interesting. In the mean time, please feel free to comment and tell us some of your favorites!

According to her website, a Souljourn is “A mental journey undertaken with great care and consideration to learn and grow as a person and ultimately become a better denizen of Earth. A time to reflect, reevaluate, and make changes or sacrifices to live our lives to the fullest, and reaffirm our commitment to making the world a more peaceful and equitable home for all.”

Tasha’s decision to take this journey — and to document it in her blog, as well as in The Conducive Chronicle — is to bring awareness to the realness and horror of world hunger. “As I research the myriad causes and potential solutions to the devastating phenomenon of chronic hunger,” Tasha explains, “I will eat the staple foods of the regions hardest hit by food insecurity and concentrate my daily allotment of less than 1,000 calories into one evening meal to adhere to the typical habits of those afflicted with hunger.”

The irony, of course, is that meat production is directly connected to world hunger. So if, say, a voracious meat-eater wanted to take a stand against world hunger, going vegan is the best thing she or he could do. Though the issue is obviously a complex one (food distribution is a major issue), going vegan is a necessary step toward — oh, okay, I’ll quote Gandhi — being “the change you wish to see in the world.”

As for The Voracious Vegan, kudos for taking a vegan food blog — which in and of itself is activism — and bringing it to the next step. Helping people to see all of the many profound intersections between consuming animal products and so many other things that are wrong with this planet — problems that could be significantly minimized by going vegan — is a pretty groovy way of inspiring change.

I look forward to following The Voracious Vegan’s Souljourn.