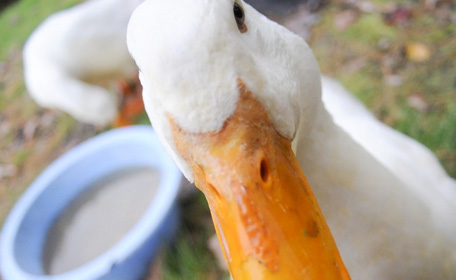 Today is the first day of Passover. This year, Mariann and I will be going to two Seders, both vegan. I’m lucky enough that most of my family is vegan, which makes holidays cruelty-free, and — for the most part, anyway — stress free. Next week, we’ll be going to an Easter brunch — also vegan. For a couple of people who are thoroughly confused by religion (me who grew up Jewish; Mariann who grew up Catholic), we’re not doing too badly this holiday season!

It made us think about the importance of churches and temples hosting vegan meals — especially around holidays — as a way of extending compassion to non-human animals. I know that many religious venues do host vegan meals, and that’s most likely thanks to an activist in the congregation bringing the idea to the powers that be. Could that person be you?

In addition to the great potential of working with your church or temple to host a vegan meal, there are also ways get even more bang for your holy buck. For example, why not get your church’s newsletter to cover the vegan meal, and throw some info about factory farming into the story? Or, maybe get a larger religious publication — such as The Jewish Star — to cover the story? With religious circles, you’re dealing with a real niche — and activism to a specific niche, especially a niche with an inherent interest in ethical behavior, can have an enormous impact. (Some might even call it divine.)

One other thing about Passover and Easter outreach: The lovely Sarah Gross of Rescue Chocolate (a vegan chocolate company where all the net proceeds benefit animal charities — and expect a video on Our Hen House  coming soon, all about this inspiring company) is making delicious creamy vegan chocolate Easter eggs, and scrumptious delectable kosher-for-Passover vegan matzoh chocolates. Seriously — I know how good these are because I was lucky enough to taste them. And, my oh my … it was a religious experience.

My Thoughts On the New Yorker’s Short Story, “Pending Vegan,” by Jonathan...