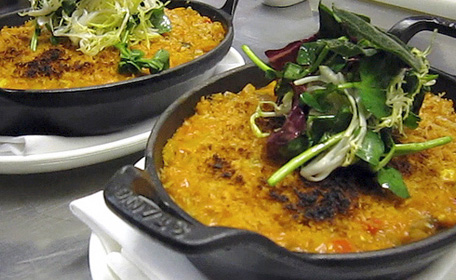 We are increasingly convinced that the single most important thing anyone who wants to change the world has to do is up their video capacity. One outstanding example of the power of video is Vegan Hotspot (love the name!), an amazing video series which highlights the delights of the outstanding plant-based food available at some of New York City’s best places to eat, some of which are completely vegan, such as Candle 79 and Blossom, and some of which are not, including the Ritz-Carlton (who knew?!) and B.B. King. Each 4-minute video features an interview with a celebrity who is visiting the establishment for lunch (how about having lunch with Moby or Robin Quivers?), a glimpse into the kitchen to see the food prepared, and a recipe.

The web-based series, which is produced by Betsy Carson, producer of Delicious TV, and Linda Long, author of Great Chefs Cook Vegan, has now been nominated for the coveted Tasty Award in two categories — Best Food Travel Series: Web and Best Green or Organic Program: Web. Those nominations will bring these incredibly tempting introductions to the best in vegan eating to a wide audience. WARNING: WATCHING THESE VIDEOS WILL MAKE YOU VERY HUNGRY!

Episode 53: “In matters of conscience, the law of majority has no place.”