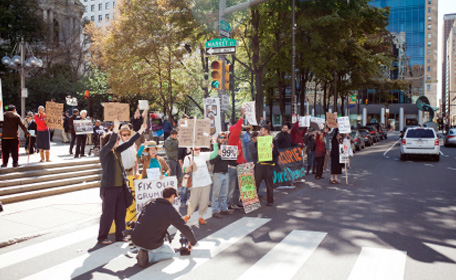 If you’ve been following the Occupy movement (and who hasn’t been?), you are already undoubtedly aware that the protests present enormous opportunities for animal activists.

Initially reported by Mercy for Animals, we know by now that the Declaration of the Occupation of New York City included, among other injustices, that corporate interests have “profited off of the torture, confinement, and cruel treatment of countless nonhuman animals, and actively hide these practices.” We discussed our feelings about this important statement on Episodes 91 and 92 of our podcast (which you can also find on iTunes). Plus, we ruminated on our own experiences attending a recent Special Assembly, as well as the happenings we observed down at Liberty Plaza. In a nutshell, we are continually inspired and fueled by this ever-growing movement. 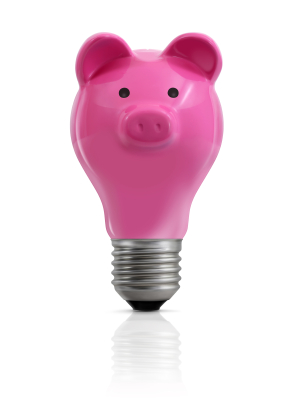 Given the fact that the protesters are seeking justice for all (a ridiculously oversimplified way of putting it — but if you’re still seeking clarity, read Chris Hedges’ “Why the Elites Are in Trouble“), it seems only natural that the message would extend to animals. And, clearly, vegan food is present at many of the Occupy sites. The donation website for the NYC Occupation includes requests for vegan food — and vegan pizza even got a mention in Nicholas Kristof’s New York Times op-ed, “The Bankers and the Revolutionaries.” That’s not only gratifying, but it seems like an obvious extension of compassion, at least for those who follow consistent ethics. We even heard through the grapevine that Occupy Melbourne is 100% vegan!

And if you need yet another reason why animal rights activists and environmentalists should Occupy Wall Street, Will Potter — from Green is the New Red — has five. Though you have got to read Will’s reasons in full, the Cliff Notes version is: 1) Corporations are destroying the planet; 2) Corporations are attacking you; 3) You have experiences to share about tactics; 4) You have experiences to share about dealing with corporate and government repression; and 5) This is bigger than all of us.

Of course, just because vegan food has been sought, and just because animals are in the Declaration, doesn’t mean that our work here is done. There are obviously some people involved in Occupy who get it about animals, but clearly that’s not going to include everyone. So, if this is a movement that interests you, your work is cut out for you. Just as in any other situation, becoming part of an effort to provide scrumptious and healthy vegan food to the protestors in your area is a powerful opportunity to inform the uninformed of the deliciousness of cruelty-free food — not to mention the compassion of it. Those passionate about speaking up for the underdog — even if the underdog constitutes 99% of the population — are the perfect audience for the message, “you are what you eat.” In other words, as we stand against injustice, as we embrace the notion of breaking down the walls that marginalize and subjugate many of us, let’s not forget the non-human victims of oppression.

This is, famously, a leaderless movement. So start connecting. Go down to your local Occupy protest, talk to people, find out who is providing food, learn and follow the Twitter hashtags (like combining #OWS and #vegan), and get involved with reshaping our world. Among the activities we have heard about people participating in are asking for a time to present to their local General Assembly on the issues of animal rights (check out the Facebook group, “The Animal Rights/Environmentalism Discussion Group of Occupy Wall Street“), getting local vegan food providers to donate food, and setting up arrangements with local vegan restaurants to take orders from kind-hearted donors for food to be delivered to the Occupy sites (check out Vegan Protest Fuel — an organization specifically devoted to this kind of effort). Another idea is to reach out to your local media, including by writing letters to the editor drawing the connections between the Occupy movement and the animal rights movement.

This is a gigantic opportunity. It’s seldom that animal oppression is on the radar of those who have come together to protest other issues. The Occupy movement is the perfect opportunity for animal advocates to make sure their voices are heard. Don’t let it go by.

There are loads of different ways to get involved in OWS and help change the world for animals — and we want to hear about them all. What have you done or heard others doing to connect the dots between the Occupy movement and animal rights? Comment below!