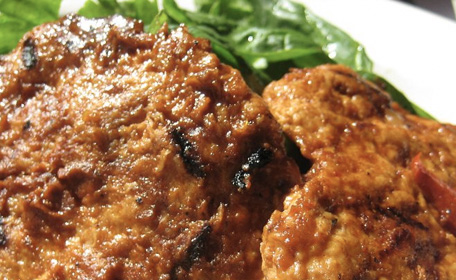 Don’t tell me there’s no vegan food near you. Though I understand that whatever city or town you live in is almost definitely not as vegan-friendly as this here Big Apple — and, chances are, you don’t have that many (or any) 100% vegan restaurants a block away — there is vegan food. There’s vegan food at nearly any ethnic restaurant near you, and even mainstream national chains often have vegan options (as do fast food joints). Here are just a few. Plus, since supply is driven by demand, the more you request vegan meals at that steakhouse near you, the more likely the chef will be to put it on the menu as a permanent item.

But what about when all you want you to do is plop yourself down in front of your Netflix insta-queue and enjoy a delectable vegan meal, TV-dinner style? Though there are options of yummy frozen prepared meals (Amy’s Kitchen springs to mind), there’s kind of nothing else on earth like Veggie Brothers.

Veggie Brothers is an online vegan restaurant. You pick what you want from their vast menu, and — providing you reside in one of the 50 states or a Canadian province — it is delivered right to your door.

Check out the fun, one-minute video they made, detailing the process of ordering:

And look at their noble “philosophy”:

It is Veggie Brothers philosophy that we can awaken the world to the benefits and joys of a vegan diet but only with a “one-two-combination” of (#1) great delicious vegan food that people already know, love, and enjoy, and that doesn’t require anyone to give up their culture, identity, or traditions, and (#2) with proper well organized information that touches, moves and inspires the heart, the mind, and the soul to make a better dietary choice for themselves, the planet, the animals, all of mankind, and the creator above and within us all.

Though we haven’t yet tried Veggie Brothers (but plan to imminently), there is a thorough and helpful review on SuperVegan.

It should go without saying that Veggie Brothers is a unique and effective form of food activism. The only downside is that now, I feel absolutely ravenous!

Episode 12: “… respects and enhances the freedom of others.”

You Should Go On a Virtual Tour