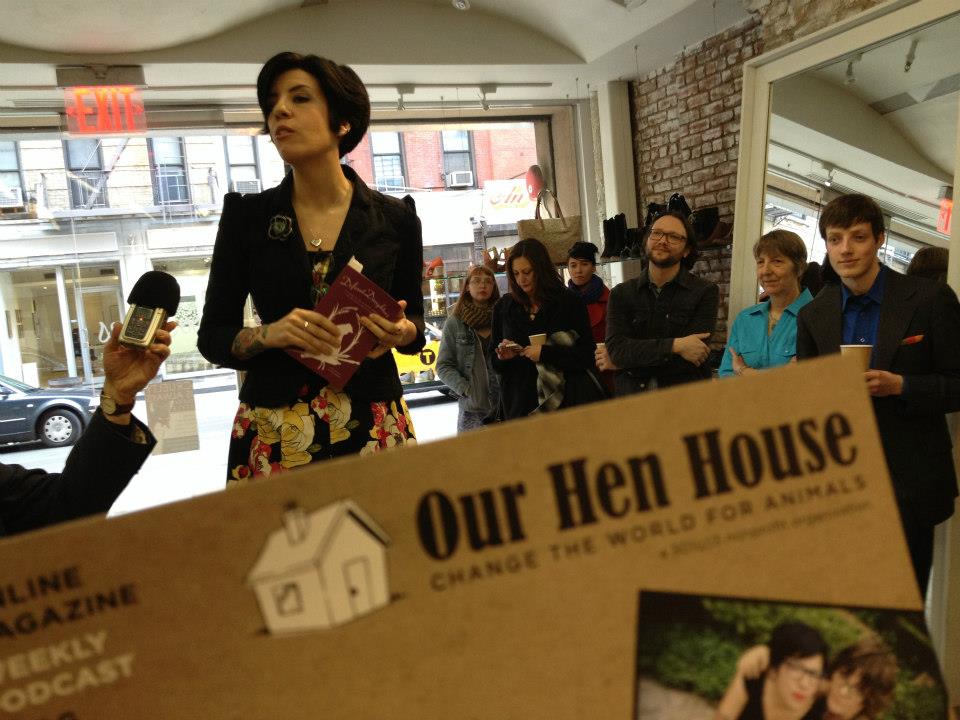 For those of you who came to last week’s NYC reading of Defiant Daughters: 21 Women on Art, Activism, Animals, and the Sexual Politics of Meat, well, thank you for that. It was such a special evening, and I was so delighted to share (with the standing room only crowd!) an excerpt from my chapter, which is entitled “Found Art, Found Hope.” Carol Adams was dynamite, as always, and it was an honor to meet (and reconnect) with some of the other contributors to the book. As you probably know by now, the royalties from Defiant Daughters are benefiting Our Hen House, a gesture that means the world to me.

I already published an excerpt from my chapter, but now that the book is out there, I hope you will support the cause by buying a copy today. Now, in addition to the excerpt you can read online, Lantern Media has produced an audio recording from the NYC book reading, as well as a video interview of me which they filmed at the launch party held just before the reading at MooShoes. In the interview, I talk about what it means for each of us to “live defiantly.”

Lantern also published other audio excerpts and video interviews with several of the contributors, and I encourage you to watch and listen to these wise women.

Special thanks to Lantern Media (and Martin Rowe, specifically) for producing such incredible videos and audio excerpts. And a special shout-out to the editors of the anthology (who don’t get nearly enough credit for putting this manifesto together) — Wendy Lee and Kara Davis.

We’ve already given you the opportunity to win a copy of Defiant Daughters for yourself. I was blown away by the thoughtfulness in your responses to the question of how veganism and animal rights intersects for you (if at all) with feminism. I encourage everyone to take a look at the comments (now there’s a sentence I don’t say too often!). If you’re a member of the Our Hen House flock, today starts a second giveaway opportunity just for you — so definitely get in on that, flockers.

Lastly, earlier this week, I was lucky enough to be a guest alongside Carol Adams on Progressive Radio Network’s show, “It’s All About Food,” with host Caryn Hartglass. Carol and I discussed Defiant Daughters, how feminism is changing (for better and for worse), rape, and what to call the vegan version of traditionally animal-based foods. I hope you take a listen.