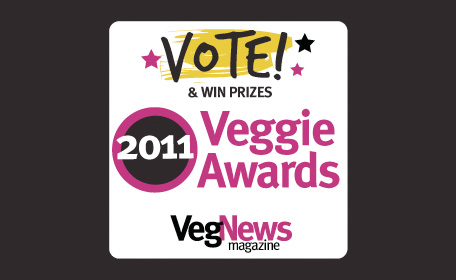 Every day, Mariann and I post a different idea or opportunity to change the world for animals. Show your support by voting for Our Hen House as your favorite blog in this year’s VegNews Veggie Awards! It’s the first year we’re nominated and we would love the opportunity to win, so that more people can learn about Our Hen House’s vision to mainstream the movement to end the exploitation of animals. VOTE NOW!  Thank you!

The fabulous folks at VegNews told us that just by voting, these are the fabulous prizes you will be entered to win;

Grand Prize: VEGAN CARIBBEAN CRUISE
Get ready to embark on an all-expense paid vegan vacation of a lifetime. You and one very lucky guest will sail on the breathtaking Italian luxury liner Poesia for a weeklong cruise with Holistic Holiday at Sea. Nourish your mind, body, and spirit as you traverse the clear-blue waters of the Carribbean, enjoying stops at St. Thomas, Puerto Rico, and the Bahamas. While on board, enjoy artfully prepared organic vegan cuisine, morning yoga, cooking classes, educational seminars, evening parties, and so much more. In addition, you’ll enjoy dinner at the stunning all-vegan Sublime restaurant in Fort Lauderdale before setting sail. Bon voyage!

First Prize: YEAR SUPPLY OF COCONUT BLISS ICE CREAM
Imagine taking a bite of one of the richest, most decadent vegan ice creams available. Now, imagine having this indulgent dairy-free frozen dessert in your freezer 24 hours a day, seven days a week, for an entire year. With flavors like Chocolate Walnut Brownie, Ginger Cookie Caramel, and Pineapple Coconut, Luna & Larry’s Coconut Bliss is perfect for sundaes, milkshakes, or just right out of the carton. This coconut-based ice cream will leave you in a state of bliss, guaranteed.

Third Prize: VITAMIX BLENDER
Make silky-smooth soups, refreshing smoothies, and the perfect cashew-cheese sauce with a state-of-the-art Vitamix blender, a favorite of the VegNews staff. With a motor that packs some serious horsepower and blades spinning at upwards of 240 miles per hour, the Vitamix’s power and performance can’t be beat, and neither will the ice cream, bisques, and piña coladas you make with it (send photos!). This industry-leading culinary contraption is a must-have in every vegan kitchen.

Plus, Weekly Giveaways! CHOCOLATE TRUFFLE BOXES
Trust us, you’ve never tasted vegan truffles like these. Premium Chocolatiers’ 30-truffle boxes feature classic, decadent flavors such as “milk” fudge, coffee, Grand Marnier, raspberry, and salted caramel made with the company’s own soymilk-based pareve chocolate. Whether you’re spending the evening hosting a dinner party or simply relaxing at home, you will want these luxurious truffles by your side. (five winners)