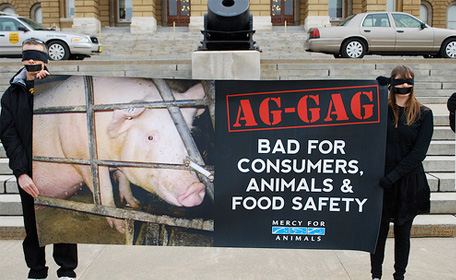 We usually reserve coverage of current events for our podcast, but there are two news items that not only demand all of our attention, but are creative representations of activism at its finest. Both of these items will be covered during tomorrow’s podcast episode, during which we’ll have the opportunity to interview the heads of two game-changing organizations. So tune in tomorrow for an inside look into 2 huge news stories, as told by Nathan Runkle (Mercy for Animals), and Kim Sturla (Animal Place). (There will also be a thought-provoking, at times emotional, and equally fun interview with activist Patty Shenker that you won’t want to miss.) 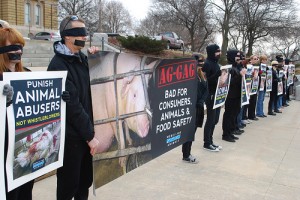 You also shouldn’t miss what’s going on in Iowa. To “demonstrate,” see Mercy for Animals’ dramatic street theatre outside the Iowa Capitol Building in response to the incredibly unfortunate passage of legislation that targets and suppresses whistle-blowing in agribusiness. The activists donned blindfolds, gags, and black clothing, holding up signs that read: “AG-GAG: BAD FOR CONSUMERS, ANIMALS & FOOD SAFETY,” and “IOWA: SAFE HAVEN FOR ANIMAL ABUSE.”

On Tuesday, both the Iowa Senate and House passed a bill aimed at preventing farm workers from documenting and exposing acts of cruelty to animals — an effort championed by corporate factory farming interests.  The bill is currently on the desk of Iowa’s governor. MFA is urging him to veto this dangerous and misguided legislation.

This ag-gag law, just like the ones pending in several other states, will not only suppress our First Amendment rights, but in attempting to ban the filming of factory farms, will keep Americans in the dark regarding the standard cruelty that billions of animals experience every second. Kudos to MFA for encapsulating all of that so effectively in their chilling display of activists who have literally been blindfolded and gagged.

While videos about the horrors visited upon animals in agribusiness are hitting the news on a regular basis, thanks to Mercy for Animals, Compassion Over Killing, and HSUS, there are 2 reasons why we are taking the opportunity to bring this particular video — produced by Animal Place — to your attention.

First, this video shows something a bit different. We all hear from time to time about animals, especially chickens, being abandoned without food or water because of financial woes, but we never get to see what that means up close. The sight of these chickens, left to die in their cages without even a chance of finding their own way to survival, demonstrates as nothing else does the absolute lack of consciousness, or care, on the part of their “owner” that these are (were) living creatures, with interests of their own and a passion to live. How Animal Place managed to get hold of this footage is beyond us. This is the kind of thing that agribusiness and its supporters want desperately to keep secret. It’s also the kind of thing that you need to pass along to friends and family who still eat eggs.

Second, unlike the case in most of the video footage we see, this is not just a call for systemic change (though it certainly is that). It also provides an opportunity to do something to help these very birds — or at least some of them. Animal Place desperately needs donations to help care for the 4,000-plus survivors they took in. And if you are on the west coast and have a little room, this might be the perfect time to add a few new family members.

Here is that video, which we hope you will watch (keep tissues nearby) and we implore you to share.

What a Joy! “Why We Love Dogs…” Slideshow Now Available (for Free) Online

Episode 112: “It is now life and not art that requires the willing suspension of disbelief.”