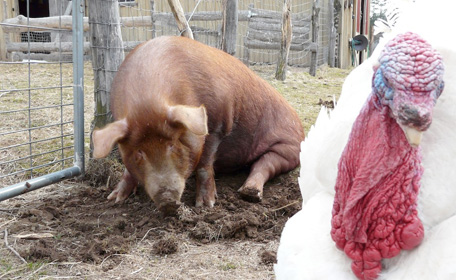 We recently heard from an amazing animal activist who is working toward social justice for animals and others through the world of academia, and is currently doing so in the context of a feminist conference. Chris Taylor, who lives in Kansas, plans on presenting a paper at the National Women’s Studies Annual Conference in Denver this coming November, entitled “The inclusionist perspective: A fat, vegan, queer, feminist, academic looks for community.” The impetus for the paper came during a recent series of mini-revelations: 1) Chris realized she encounters more hostility for being vegan than being a lesbian; 2) She felt that, as a large woman, she gets cross-eyed looks from other vegans (as if she’s “lying,” she told me, or “suspect”), and 3) It’s vital to emphasize, particularly at this women’s conference, the fact that the oppression of nonhuman animals is a feminist issue.

The theme for this year’s Women’s Studies Annual Conference is “outsider feminisms.” Chris, who teaches women’s studies, saw the theme as a way to get a room full of feminists talking and reflecting about the many connections between animal rights and feminism. Here is her proposal description, which she kindly shared with us:

In this paper, using the work of bell hooks as a theoretical foundation, I explore and call for a new perspective called inclusionism. What is an inclusionist? An inclusionist recognizes the intersections of multiple perspectives and resists all bigotry and discrimination. Inclusionists are ethical vegans who reject speciesism, ableism, sexism, ageism, racism, heterosexism, and other forms of bigotry and discrimination. Inclusionists work for social justice, equal rights and equal treatment, the inclusion of all species. Inclusionists reject hierarchies of marginalization and recognize that no human can be free while members of any species are othered, oppressed, or ostracized.  The inclusionist perspective is built on the idea that theory for the sake of theory does not work, that theory must be applicable and that all forms of discrimination are connected. Inclusionists recognize that the othering of nonhuman animals is directly connected to the othering of human beings and work to educate and raise awareness regarding the same. I recognize that such a perspective is an “outsider feminism” as it asks human beings to lift the veil regarding the idea that human beings are more valuable than other species. This perspective is both reflective and reflexive in that inclusionism demands that human beings work to reflect on and eliminate cognitive blocks regarding the use and ownership of nonhuman animals and reflect on (include) the connections to the abuse, discrimination, and domination to othered human beings.

If you are an academic, a professor, teacher, or student, whenever you can bring up animal issues within the context of your studies, papers, or presentations, do! Given the many bridges between social justice issues, there are thousands of ways in.

If the connections between women’s studies and animal rights is something that intrigues you, there are tons of essays and books written about it (start here), and Mariann and I actually discussed this topic when we were interviewed for women’s history month.