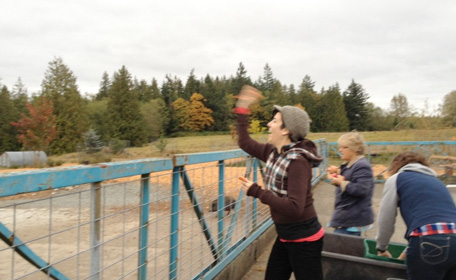 Mark Middleton, the brilliant and gifted mastermind behind AnimalVisuals.org — who joined us a katrillion years ago on Episode 44 of our podcast — has, as they say, done it again. Adding to his mind-blowing, life-changing collection of “compelling visuals and interactive media to empower animal advocates, educate the public, and expose the injustices of animal exploitation,” Mark brings us The Virtual Gestation Crate. Giving viewers an all-too-real view into the life of a confined pig, The Virtual Gestation Crate allows us to experience the horror for ourselves. Like a pig in a gestation crate, we can lie down, stand up, gnaw at bars, and sway (take some dramamine for that effect, folks, and perhaps some Xanax). We can’t turn around though (neither can the pigs). But, unlike pigs, we can stop when we’ve had enough.
This sickeningly lifelike game-that-is-anything-but is an incredible advocacy tool, a profound eye-opener. This interactive visual is, incidentally, being used as part of the multi-pronged approach that Mercy for Animals is taking with their campaign against Walmart. Share this widely.

I wasn’t able to take part in this activity, this virtual hell, without being reminded of the wonderful and hilarious pigs whom I had the honor of meeting recently when I visited Pigs Peace Sanctuary, just outside of Seattle (the trip was the focus of our podcast a couple weeks ago — Episode 145). During my visit, I saw first hand how these ambassador animals communicate with their buddies, crave attention from humans (well, the more outgoing ones, anyway), and find great enjoyment — as we do — from eating delicious food (I was able to feed them apples and carrots!). 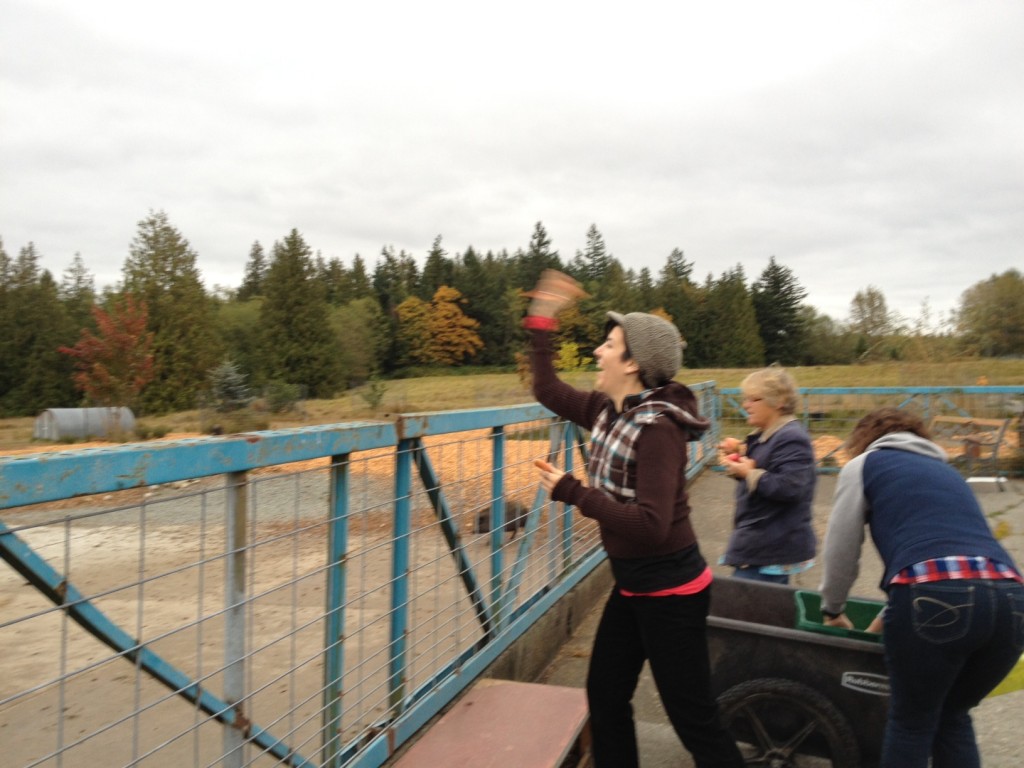 Pigs are intelligent. Like humans, pigs are omnivorous, which goes along with being curious and having the ability improvise in new environments (pigs live on every continent except Antarctica). Pigs seek variety, and like to investigate and manipulate new things that they find. Pigs are great at learning. In experiments, they have learned to control a joystick to move a cursor and select items on a computer screen in only a few hours — as fast as chimpanzees did! Pigs can exploit the knowledge of other pigs to find food, and can conceal knowledge to deceive other pigs. This shows that pigs may be able to work out what another pig may be thinking, which is an advanced cognitive ability. Pigs are highly social. They live together in family groups called sounders, with a mother pig and her litter at the core. They identify each other using their highly developed sense of smell. They keep in close contact with each other using grunts, and greet each other by touching snouts. Pigs have powerful personalities, and each one of them is a unique individual. They take pleasure in food and seeking food, scratching against trees, taking naps and mud baths, and touching and playing with other pigs.

It sickens me to think that they are abused so thoughtlessly, so widely, but it heartens me to know that people like Mark Middleton are out there — using their skills in art and computer graphics — to change the world for them.

Episode 146: “If we cut up beasts simply because they cannot prevent us […] it is only logical to cut up imbeciles, criminals, enemies, or capitalists for the same reasons.”