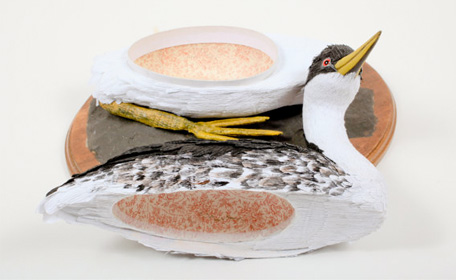 Have you ever been sitting at a bar or cafe, enjoying a micro brew or maybe a soy latte, when you suddenly noticed the corpse neatly nailed to the wall, staring back at you unflinchingly — as if to say, “help?” WTF, right? On what planet is taxidermy considered “art”? And what asshole thinks it’s acceptable to brandish their murder victim’s head? Blech! 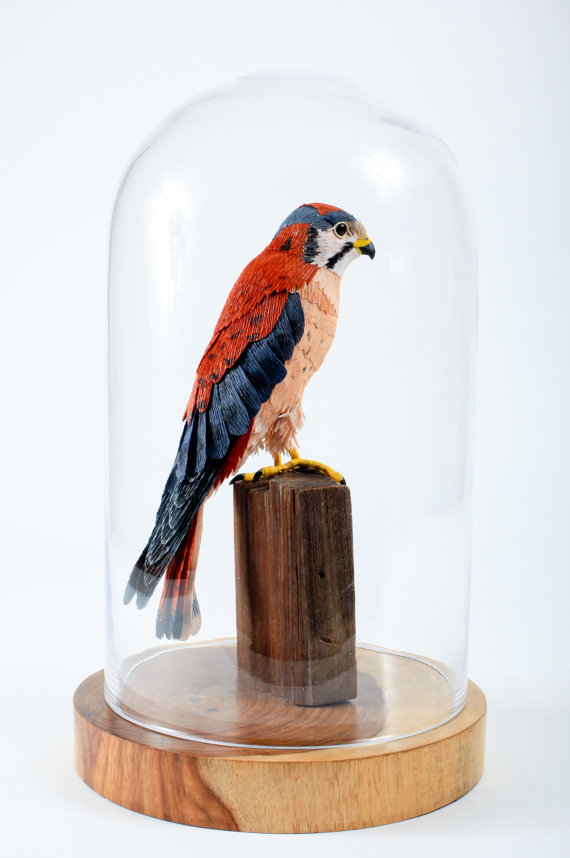 Now imagine if you will, vegan taxidermy. Crepe paper birdies (no killing here!), wire legs, Styrofoam bodies, with a hint of papier mache, sculpting putty for the claws and beaks, and paper feathers. Oh right — and glass eyes. Slap on top of that a wickedly talented artist who is just as perplexed as we are as to why “traditional” taxidermy is a Thing, and you have yourself my new favorite Etsy artist. Her page explains:

Rather than art for Art’s sake, I hope my Vegan Taxidermy sculpture connects people to the natural world, contrasting against “cheap & now” consumer culture and the insular, disconnected world of Art. I focus on individually sculpting unique pieces of art that emphasize highly skilled craftsmanship and whose delicate quality and variety reflect the natural world they honor. Taxidermy has been a fascinating subject because it represents a strange commoditization of nature, revealing conflicts between preservation and ownership, such as the nineteenth-century occurrence of killing the last few living specimens of (now extinct) birds for wealthy collectors.

I would like to papier mache an “I love you” sculpture and mail it to this woman. This is yet another example of a cruelty-free alternative to disgusting, mean, hateful, and unnecessary animal exploitation and commodification. There is literally a vegan version of everything if you look for it. And — oh yeah — if you create it, as this artist has done.
Oh look at that. I’m in Portland! Perhaps it’s time I “put a bird on it.” With vegan taxidermy looking so good, I think I will.

They Need a Good Lawyer