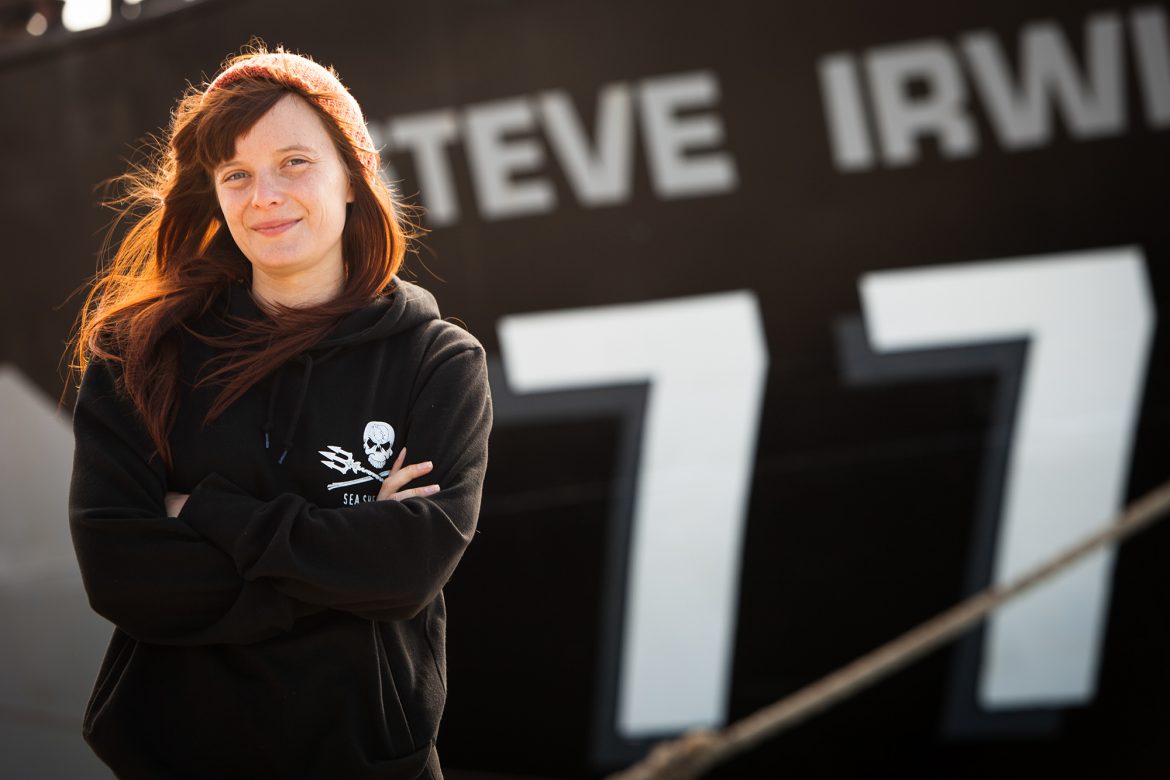 We’ve had the immense pleasure of highlighting a number of Sea Shepherd activists over the years here at OHH — most recently we published a recipe from Raffaella Tolicetti’s vegan cookbook Think! Act! Eat! A Sea Shepherd Chef’s Vegan Recipes — and we’re excited to once again share the organization’s incredible work on #ThrowbackThursday, this time from Eliza Muirhead.
This article’s originally appeared on Our Hen House on January 4, 2014. If you’d like to see a certain OHH article resurrected, email us at info [at] ourhenhouse [dot] org.
***
Let me start off by saying that today’s guest writer, Eliza Muirhead, is about to become a hero to you. I thought Eliza was pretty swell back in 2010 when OHH reported on some student filmmakers (including Eliza) who focused their studies on animal rights. Then, in 2012, I told you about the incredible program Fair Projects, which she started – a comprehensive resource for nonprofits aiming to provide “professional quality services and products in media, marketing, fundraising and communications at a fair rate.” In 2013, I had the chance to meet this changemaker, who was already pretty high up in my book, when she visited New York City along with her good friend, Hillary Watson – who I somehow convinced to write a guest column for OHH about veganizing an entire galley, when she was the cook on a ship involved in a campaign to collect sperm whale skin biopsies in order to determine whether the whales were accumulating toxins associated with the 2010 BP oil spill. Eliza, Hillary, Mariann, and I sat at the vegetarian café ‘sNice in Soho, and chatted about the lifesaving work of Sea Shepherd Conservation Society, as well as our other various projects. But mostly, Mariann and I listened intently, sipping our soy lattes slowly – trying to buy more time with these stupendous women. We sat in awe as Eliza and Hillary (Captain Paul Watson’s niece) told us tales of their travels on board Sea Shepherd’s Steve Irwin, as well as on the Odyssey, which was part of a collaborative campaign between Sea Shepherd and the marine research organization Ocean Alliance (the ship that Hillary successfully veganized).
It was one of those experiences that can leave you feeling both invigorated and deflated – how can what I do possibly hold a candle to these true animal heroes who are putting themselves on the frontlines, risking their lives in order to save animals? But that defeatist attitude quickly dissipated when I took a step back, let the caffeine from my latte settle in, and reminded myself that changing the world takes all types, all roads, and all kinds. As with Hillary, Eliza is indeed one of a kind, and I’m absolutely gobsmacked that she agreed to share a little of her story with us today – as she currently is on board the Sea Shepherd’s Steve Irwin.
***
“You’re Lucky to Love What You Do”: My Journeys On and Off the Sea Shepherd’s Steve Irwin
by Eliza Muirhead 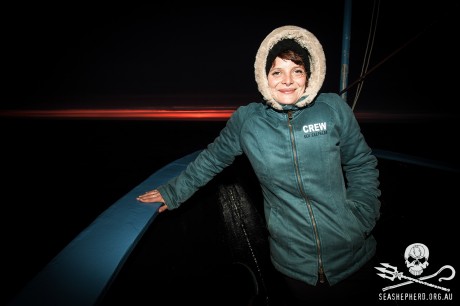 Today marks our seventh day at sea and I am currently sitting in the mess of the Steve Irwin distracted by portholes diving into the electric-blue water. I find it hard to believe that only a week ago I was sitting on a hot, crowded Melbourne tram.
It was a strange day – our last morning on land and Melbourne’s first real summery day. I took the opportunity to duck into the city, enjoy my last city coffee, and pick up a few bits and pieces for my Secret Santa gift – rolls of thread that would later turn into evenings spent chasing them as they rolled around my cabin floor. It’s been special this year to leave so close to Christmas. Unlike last year, when we left at the beginning of November, we’ve been able to watch the Christmas decorations go up around town, see the jacarandas bloom, and have time to work on our Secret Santa presents (a job taken very seriously on the Steve Irwin – only handmade gifts permitted).
I survived the city full of mad shoppers, picked up my remaining bits of equipment – a second camera body for the small boats, a few more thermals – and aimed to be back on the boat by 2:30 p.m., in time for Customs to check our passports and clear us out of the country. 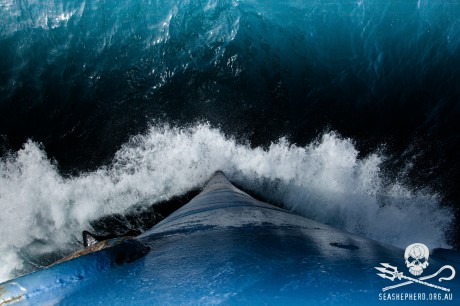 But I had underestimated the city traffic and was a bit late heading back. I must have been  nervously looking around because I attracted the attention of a woman who, although previously content to direct her Christmas ramblings to herself or anyone who would listen, decided I was a good target for conversation. It started with, “What are you up to this afternoon?” to which I hesitantly replied, attempting to be ambiguous instead of giving the strange truth, “Oh, just on my way down to  the cruise ship terminal.”
That didn’t stop her. “What’s that package  you’re holding? Why’s it all wrapped up in Christmas material like that – is it so you can throw it over your shoulder and put a stick through it? Are you going on a trip or something?”
“It’s a Christmas  care package from my friends, and, yes, I am going on a ship.”
“Ohhhh, how exciting! Where’s your ship going to, dear?”
I quietly replied, “I’m going to Antarctica with Sea Shepherd.” 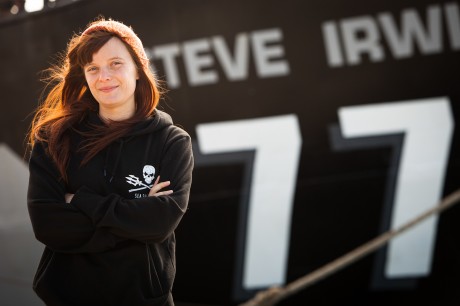 At this point, the woman turned to the packed tram full of Christmas shoppers and shouted, “OH MY GOD EVERYONE! I ASKED THIS GIRL WHERE SHE’S GOING THIS AFTERNOON AND SHE’S GOING TO ANTARCTICA!!! TO SAVE OUR WHALES!!!!” Then, in a rather surreal moment, which could only happen in Melbourne around Christmas when everyone’s feeling a bit delusional from the heat, everybody on the tram stood up and started cheering and yelling “Woohooooo! Thank you, thank you! Good luck!”
It was a strange moment. But a moment that reminded me what a special and crazy adventure this is and how lucky I am to be a part of this small group of dedicated individuals from around the world who share this one notion: the notion that yes, an individual can make a difference.
Although this mad city shopper experience was surely heat and exhaustion induced, the same sentiment has emerged in so many small moments that I have experienced with strangers over the past year that I have been with Sea Shepherd. 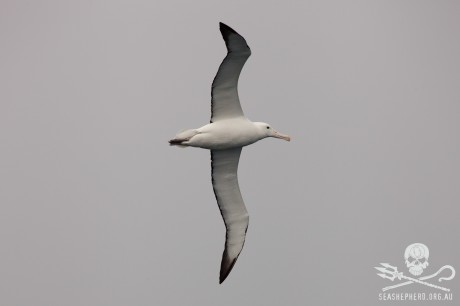 So many times, I have found myself in transit somewhere between Antarctica and the Gulf of Mexico, sitting next to strangers on buses, planes, trains, and trams, strangers who, out of either curiosity or boredom, have inquired as to what I do. After navigating through an always awkward summary of my life – living on a marine conservation ship, sailing all over, producing photos and videos that communicate our message to the world – I am often met with the kind of shock that confronts anyone who describes an unconventional life to a stranger. But once I get past this initial response, the conversation frequently ends in the same place – that I am lucky, at such a young age, to be able to follow my passion and love what I do. To a certain extent, I agree. I am lucky to have this opportunity. But I don’t believe that it’s all luck. What I have learned from the founder of Sea Shepherd, Captain Paul Watson, is that everyone can make a difference by applying what they love doing, and what they’re good at, to something they believe in.
So here we are, heading south, watching the ocean change from dark to electric blue and experiencing that strange notion of time that comes from travel by ship and the ever-persisting daylight of an antarctic summer. During these long rolling days at sea, it’s difficult to think a day ahead, let alone begin to imagine what these coming weeks will bring. However, I do find my thoughts with the other crews making this very same journey south – the crews of the Japanese whaling fleet. I can’t help but wonder if the same albatross that passed me yesterday will carve through the cold air surrounding one of their ships, the Nisshin Maru, the Shonan Maru, or one of the three Yushins. And I can’t help but wonder, and hope, that, like I did, one of their crew will lock eyes with this particular bird and feel the way I did. That we don’t belong here. That there are places on this planet so unique, so wild and complete without us, that they deserve to remain safe for those who rely on them: the birds, the fish, the seals, the whales. I believe the word for such a place is sanctuary.
I also hope, for those crews – and for all those strangers on the buses, planes, trains, and trams who have shared a journey with me – that they too, can love what they do.
*** 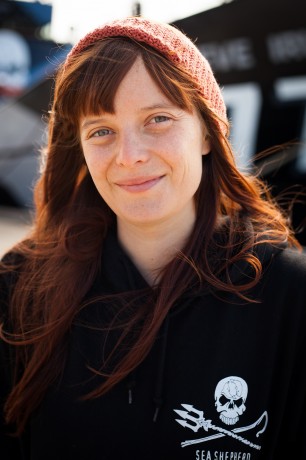 Eliza Muirhead started volunteering for Sea Shepherd while she was studying animal science at Melbourne University in 2008. After learning about the ways in which animals are treated and the environmental concerns that face our planet, she completed a masters in science communication in New Zealand and dedicated her life’s work to the documentation and communication of these issues to the world. In 2012, she joined the crew of the Steve Irwin to produce and develop visual media and communications. Over the past 12 months she has sailed enough miles to circumnavigate the globe, and has been part of defending two of the last remaining pristine wilderness areas left on this planet: Antarctica and the Kimberley region in Western Australia. As part of this work, she has seen the same humpbacks breaching against the blue mountains of icebergs while they’re feeding in Antarctica, breach against the red cliffs of the Kimberley coast while they socialize and calve in Western Australia. In the middle of 2013, Eliza sailed on the Odyssey for Operation Toxic Gulf to investigate how the pollution caused by BP’s 2010 oil disaster was building up in the largest toothed predator to have ever lived on earth: the sperm whale. Her job on board was to document the campaign and share this story with the world, both the beauty of the surprisingly resilient ecosystem and the continuing destruction of it. Now on her second voyage to protect the whales of the Southern Ocean Whale Sanctuary from the illegal harpoons of the Japanese whaling fleet for Operation Relentless, Eliza feels honored to be one of the few individuals who are part of defending these whales and documenting and sharing Sea Shepherd’s story.
Share 0 FacebookTwitterPinterestEmail
previous post

Animal Law Podcast #73: The Case of the Missing Ice