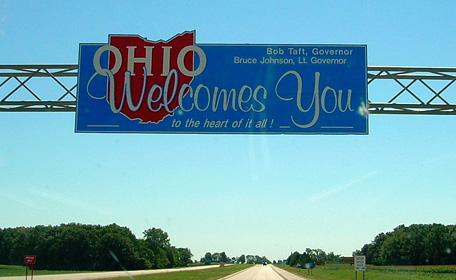 Okay, you didn’t “win” a trip to Ohio. But if you go to Ohio before June 28 to help collect signatures for the November ballot initiative banning three of the most egregiously cruel confinement systems for farm animals, the animals might win… a little anyway. And in the farm animal protection movement, a little can be a lot.

Incidentally, a couple years ago, I went to California to spread awareness about Prop 2, California’s ballot initiative banning the same cruel practices that Ohio is working to ban. I traveled around in a big truck that projected on it a movie of factory farming, urging people to support the initiative and to go vegan. Going vegan was also my primary messaging when working on that campaign, and it was Farm Sanctuary‘s as well (I was out there with Farm Sanctuary, where I worked). Obviously, banning these confinement systems is an incremental step towards ending animal cruelty, but I can tell you first hand that the amount of people who went vegan as a result of Prop 2 was staggering. Creating awareness around issues of factory farming abuses is a vital part of the journey.

The first step in this initiative for Ohio is gathering the necessary signatures to be on the ballot in the first place, and time is of the essence. By June 28, more than 600,000 signatures are needed. And the good news is, you need not be an Ohio resident to collect the signatures. But you do need to be in Ohio, so it’s time to pack that hemp duffel bag of yours and head to the mid-west. Contact Ohio Humane to find out how.