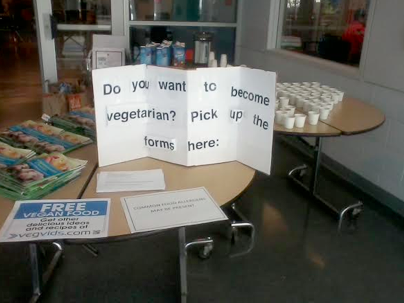 Schooltivism: A 16-Year-Old Activist Describes How She is Changing the World for Animals Through a Worldwide Web of Passionate Students

This incredible 16-year-old superstar, Chloe Falkenheim, is making hay and inspiring us to amp up our animal activism. Anyone who is young, has ever been young, or knows someone who is, could stand to read this.
***
Schooltivism: A 16-Year-Old Activist Describes How She is Changing the World for Animals Through a Worldwide Web of Passionate Students
by Chloe Falkenheim 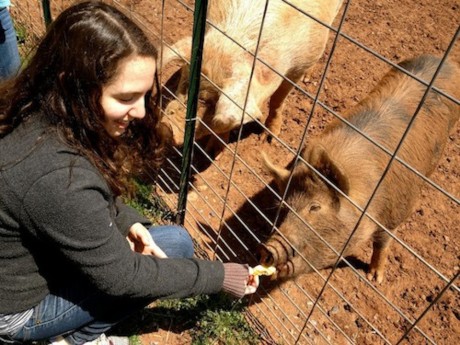 Imagine if every non-vegan citizen was exposed to a positive vegan message every single day; was given an opportunity to try vegan food every single month; had access to delicious vegan options whenever they dined out; and was surrounded by a friendly community which provided them all the support they need to change their lifestyle.
Perhaps this isn’t as far-fetched as it sounds. Student groups worldwide are making this fantasy a reality in schools across the world.
I Was Scared
When I became vegan three years ago, I was scared. Like most thirteen-year olds, I cared desperately about fitting in. I was the only vegan I knew, and I kept my veganism hidden for almost a full year for fear of looking weird.
Slowly but surely, as I read widely about veganism, I became fully aware of the devastating truth behind animal products – and I wanted to do something to stop the cruelty and environmental destruction. I decided to no longer hide. My role models became the amazing activists who were teaching people everywhere to be vegan. Still, I was at a loss as to what I could do. After all, I was in school all day, and I had no experience or expertise.
Then it struck me that I was surrounded by teenagers – the very open-minded, rebellious demographic that my role model activists wanted to target. And at school, I was in the ideal place to reach them! I took a deep breath, and started planning my animal rights club…
What Had I Gotten Myself Into?
At first, I had no idea what activities to plan. I researched vegetarian clubs, but could only find a few articles. And I had no support outside my school from other vegans or activists. Nor did I know any vegans in my school, or have any way of knowing if anyone would be interested.
But I was determined to make this group succeed. As a start, I scrapped together a list of pro-animal activities my club could do. Then, I visited the DC Vegfest – where I walked around, somewhat overwhelmed, and completely alone. Happily, I managed to leave with a few connections to activists who would later prove critical to my efforts to change the world for animals. Eventually, I was very fortunate to find a supportive faculty sponsor and co-leader. With this, I officially started the club.
I was thrilled when, in just the first year and a half, the club had many successes: we persuaded my school cafeteria to add vegan options; we put up posters, sent announcements, and made videos with positive vegan messages; we set up a vegetarian starter kit stand and gave out thousands of free vegan samples and leaflets; we hosted a guest speaker who talked to hundreds of students about factory farming; we raised funds to sponsor a pig named Isaac at Poplar Springs Farm Sanctuary and went on a field trip there; we helped start a vegetable garden; we started a vegan mentoring program; and we added plant-based eating to my school’s health curriculum. (Not too shabby!)
When the Going Gets Tough…

Looking back, it’s wonderful to think of all the club’s initial successes. Admittedly, however, during that year and a half, there were some pretty tough times. The club was tiny and, to tell the truth, I had no idea what I was doing. I rarely received positive feedback (many people even laughed at the club), and I often questioned whether I was really making a difference – sometimes to the point where I nearly gave up.
I see now that activism can be tough work. Logistics are tricky! I made so many mistakes that I cannot even count them all. Also, as a 15-year-old, I was not always an adept and tactful leader. It became clear to me that I needed more support. I not only needed more ideas for projects, and a little advice, but I also needed a like-minded community. I desperately wanted to connect to other clubs and student leaders.
There was, it seemed, nowhere to turn – but then I realized that other students involved with similar clubs around the country and the world probably had the same exact struggle at one point. I wanted to find them. In addition to needing support, there were other reasons for wanting to reach out to student activists in other schools. My vision was (and remains) for students at every single school to hear about veganism on a regular basis. I wanted students everywhere to have a vegan selection in their cafeteria. If that tiny shift could be replicated in more and more schools, I felt it had the potential to make a huge difference. Also, the more that students who cared about animals got involved in advocacy now, the more activists there would be in the future.
The Biggest Untapped Potential
Plus, I recognized that schools are one of the best possible places for activism: Everyone spends a large chunk of their formative years in schools, and therefore, we can be sure that by doing outreach in schools, we will reach absolutely everyone. Student groups are the only ones who can lead this groundbreaking work. Additionally, student groups have the ability to partner with outside groups to help bring their amazing work into their schools, when that would otherwise not be possible since outside groups are limited in their capacity to directly work in schools.
For all these reasons, I decided to start an alliance of school vegetarian clubs worldwide.
VegYouth brings student activists into a community that provides the positive reinforcement, motivation, inspiration, support, and advice that I did not have when I was just starting out. It does this through one-on-one coaching for beginner activists; a buddy system where we connect similar student activists; and monthly conference calls where “VVY” members discuss their clubs’ problems and successes, and receive advice and support. We keep in contact and post updates about our clubs through a Facebook group and a new weekly e-newsletter to inspire each other.
To help increase the effectiveness of each student becoming an activist and leader, we also have a book club where we discuss books about effective activism. Plus, we interview inspiring activists from our advisory board as well as from successful student clubs, and we have a large and growing repository of strategies, resources, guides, and ideas for student activists. Finally, VVY connects clubs with animal rights and vegetarian organizations that can help them, and we connect those organizations with clubs to expand the reach of their campaigns into schools. Through these connections, I envision a movement where student groups and larger organizations are in constant collaboration, with school activism as the focus.
About 40 students in countries around the world have joined. After being a part of the worldwide alliance, students have made statements such as, “I feel that I’ve made a difference, however small!”
Let’s Change the World Together!
In the four months since Vegetarian and Vegan Youth has started, I feel that it has indeed made a difference – a big difference – and that it has a great potential to do even more.
The amount of animal cruelty in this world is devastatingly high. The environment and climate are under huge stress, and our actions in the next few decades are critical in determining whether or not humans can continue to live on this planet. The work that’s yet to be done is enormous. However, I am no longer afraid or intimidated. I know what I can do to help solve these problems. My goal is to change the course of history by helping more student groups promote veganism.
***
You Can Help, Too!
Are you a middle school, high school or college student or do you know any vegetarian or vegan students? Join (or recommend that they join) VegYouth!
Not a student? Still want to help? We will cherish any support or skills. 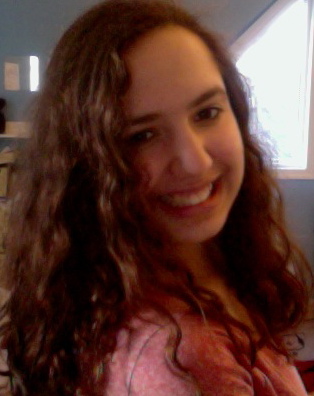 Chloe Falkenheim is a 16-year old from the greater Washington DC area, who grew up in a meat-eating family but has been vegan for three years (and vegetarian for seven). She is founder and president of her school’s Vegetarian Club, and founder and executive director of VegYouth, an organization that helps youth become vegetarian or vegan despite obstacles they might face, and also helps them promote the lifestyle in their schools. Chloe is also a member of Mercy for Animals’ Youth Advisory Board, as well as the Pollination Project’s Youth Grantmaking Advisory Board. She was named “Student of the Year” by the Humane League, and her work has been featured in the Charleston Gazette and the Huffington Post. Aside from activism, Chloe loves running and music.
Share 0 FacebookTwitterPinterestEmail
previous post