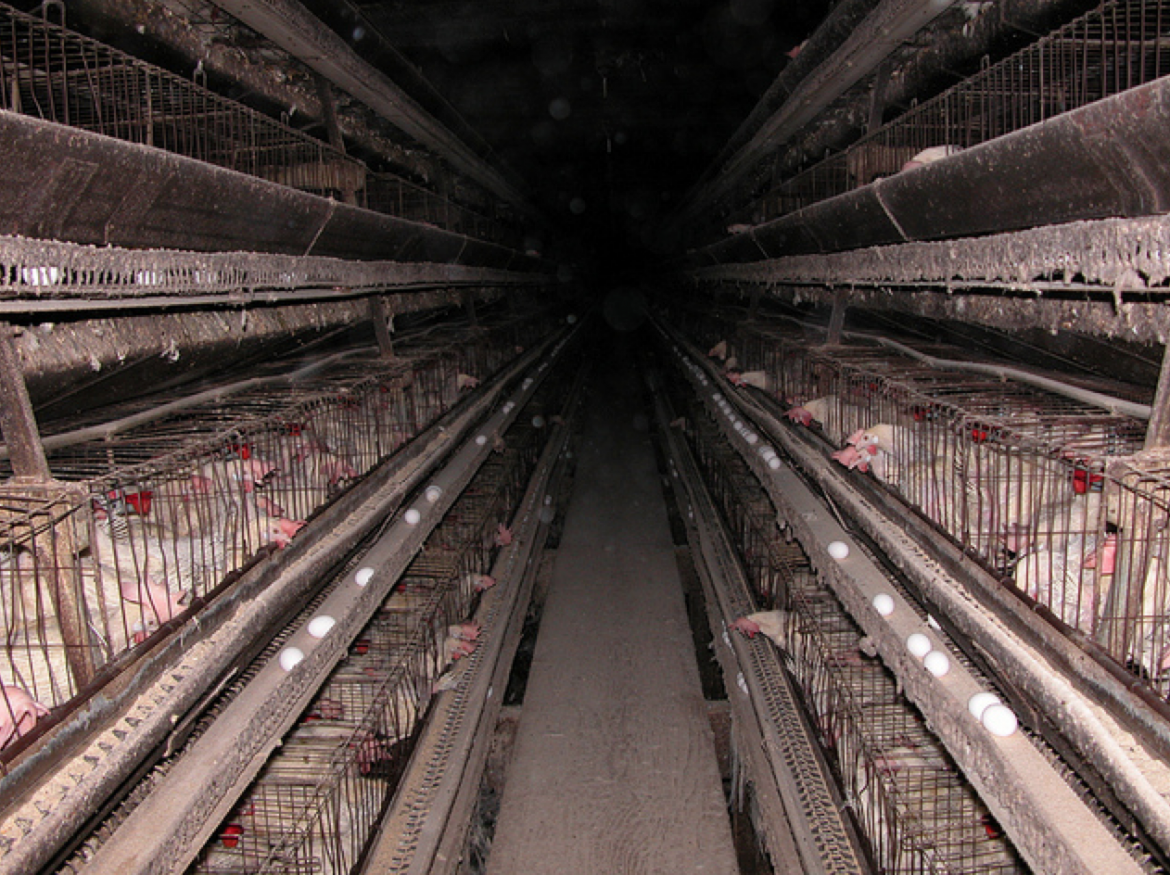 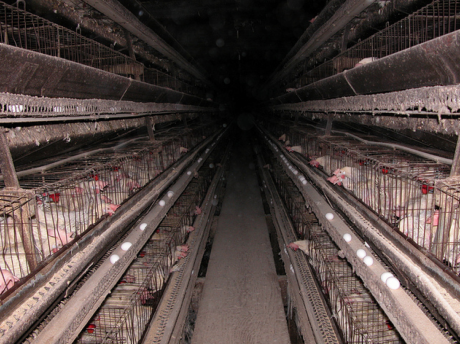 Battery cages as documented by Compassion Over Killing

If you ever had any question that Big Ag has a stranglehold on legislatures across the country, including the one in Washington D.C., you can now put that question to rest.

Wednesday night, the House Agriculture Committee finally passed a Farm Bill, which will now go on to the House for a full vote. Within that long overdue, complicated, incredibly important piece of legislation is a provision sponsored by Representative Steve King (R.–Iowa) that could effectively end all efforts to reform the way animals are treated in animal agriculture in the US. It will also eviscerate California legislation that is already in place that is on track to prohibit the sale of battery cage eggs and other legislation, that just came into effect, protecting ducks and geese from being force-fed for foie gras.

This amendment basically provides that no state can prohibit the sale of agricultural products produced in a way that would violate its own laws if the product was legally produced in its state of origin. If it passes, it will mean that, when it comes to agriculture, Congress will have guaranteed a race to the regulatory bottom. If your state wants to pass a law limiting what Big Ag can do — to protect workers, animals, food safety, the environment, whatever — and those regulations might cost producers anything at all (as better practices tend to do), your state cannot do anything about products from other, less progressive, states undercutting the prices of local producers. Republicans otherwise devoted to states’ rights will have pulled the rug out from under states (well, out from under progressive states, anyway), requiring them to either embrace the lowest common denominator when it comes to regulating Big Ag, or to undercut the competitiveness of its own producers.

Well, it’s pretty much all about chickens.

Over the past several years, animal rights groups have mounted campaigns in a number of states that, among other things, have successfully placed limitations on the way egg producers can treat their hens. These limitations are very minimal, but are vast improvements over the way that hens live now, which is, without going into detail, pretty much too horrible to contemplate.

The first of these campaigns was in California, and success there was achieved by ballot initiative. Voters of California were given the choice, on the ballot, to say yea or nay to better conditions for the birds. By an overwhelming margin, they said yea. Big Animal Ag got worried. Then, Michigan passed a similar law and Ohio put a moratorium on new battery cage facilities. These laws were passed by legislatures, but probably not out of the kindness of the legislators’ hearts. Ballot initiatives were looming in those states as well, and Big Animal Ag, and its legislative minions, no doubt saw the writing on the wall.

This was bad. Government interfering with the way animals were treated. Different states having different standards. And, most of all, of course, money. It costs money to raise chickens in conditions that are not quite so brutal as the current industry standard. Since the improved conditions are minimal, it doesn’t actually cost a lot more money, but in a highly competitive market, increased regulations imposed on one sector of a business that are not imposed on another sector of that same business can be devastating.

But there were work-arounds. In the proud tradition of industry everywhere, there was always the possibility of Big Animal Ag moving its facilities to states that had lax, or no, regulations, and no possibility of a ballot initiative, and then shipping their eggs to states with regulations, like California. While that’s hard to do with plant agriculture, since you can’t move your land, it’s a piece of cake when it comes to animal agriculture — which just involves buying cheap land, building a lot of huge sheds (or, for cattle, feedlots), cramming them with animals, and shipping in feed.

But then California got smart. Worried about the future of its egg industry, and not wanting to see it move on to greener pastures (though, really, we’re talking about the opposite of green pastures here), it soon passed a law that will, once these new standards prohibiting battery cages go into effect, prohibit the sale of any eggs, regardless of their state of origin, that were not raised in accordance with them. That way, producers in, say, Idaho, a state that enthusiastically welcomes factory farming in all of its worst manifestations, and other nearby states, cannot start shipping eggs to California that would be able to undermine California’s farmers’ prices because their hens are treated more brutally, and cheaply.

United Egg Producers, the industry trade group that represents the vast majority of egg production companies in the US, was reading the writing on the wall. What they saw was a growing patchwork of different regulations in different states governing the treatment of hens, that now had the potential to affect producers even in states that didn’t have any laws governing the treatment of hens. And different states might start enacting different standards, making the situation that much more complicated.

They no doubt also noticed the most important message that the ballot initiative had given them — that the way in which virtually all of the many millions of laying hens in the United States were living was not acceptable to a majority of people. People might not yet be buying according to these beliefs — still grabbing the cheapest eggs on the shelf — but it was only a matter of time. They may also have noticed that people were starting to exhibit some wavering in their devotion to eating eggs, and an increase in concern about the health implications of egg consumption. They may even have been aware that innovative food start-ups, likely the blatantly named Beyond Eggs, were coming up with cheap, healthy, commercially viable alternatives to eggs (check out the Our Hen House interview with founder Josh Tetrick).

For whatever reasons, they felt vulnerable. Vulnerable enough to do a deal with their arch-enemy, the Humane Society of the United States, to co-sponsor a bill that would set federal standards for the treatment of laying hens. Those standards were, no doubt, the least they thought they could get away with while putting people’s concerns to rest. So they went to Congress and begged Congress to regulate them, at least a little bit.

The resulting bill, the Egg Products Inspection Act (known as the Egg Bill), which has been hanging around Congress for a few years, would set certain very minimal standards for the conditions in which egg-laying hens are kept. The conditions are actually fairly pathetic. After a 15 year phase-in period, each hen, depending on her breed, would have either 124 or 144 square inches of space to live in, plus access to a perch, nesting box, and scratching area. Egg cartons would also have to be labeled to inform consumers whether the eggs came from caged hens.

Though they’re notably better than the conditions for hens now, and they would be the first federal standards regulating the treatment of animals in factory farms, these standards are less than what California’s voters had demanded. In fact, the Egg Bill is so weak that it is even controversial within the animal rights movement. Some people think it is a step forward, some think it will forever set in place these very low standards and eliminate the possibility that legislatures around the country might someday do better for hens.

However, let’s face it. No one in Congress is concerned with the attitudes of various factions of the animal rights movement. The real support for the Egg Bill comes from United Egg Producers. Seems like a slam dunk – an industry joining together with its most powerful critic asking Congress to regulate it. But the rest of Big Animal Ag, like the National Pork Producers Council and the National Cattlemen’s Beef Association, were pretty disturbed. They were, in fact, horrified at the idea of any federal standards for the treatment of animals. All of this upset their comfortable world, in which the treatment of their animals is a private matter that no one is allowed to interfere with.

There were two possible approaches to this. First priority was to defeat the Egg Bill. Last week Senate Ag Committee Chair Deb Stabenow (D.—Mich.) took the Egg Bill out of the Senate’s farm bill markup, so that problem was taken care of, at least for the moment. But that still left the problem that the egg producers were facing in California, and which other animal ag concerns might face in the future, of some states potentially passing laws that would require out-of-state producers to comply with progressive legislation in order to sell their products there.

And thus we come to the latest chapter in this saga. The House Agriculture Committee, always eager to please, has attempted to take care of that as well, by including the King Amendment in its version of the Farm Bill. If enacted into law, this would mean that, if any state passes progressive legislation regarding agriculture, producers would be free to move to other, friendlier states and ship their products back across state lines. Since no state legislature is going to want to disadvantage its industry, and potentially see it move to Idaho, or Iowa, or Illinois, or any of the other vast majority of states that have no regulations limiting the brutal confinement of animals, state legislatures contemplating progressive change will have one more reason not to do anything to get in Big Animal Ag’s way.

(Since we posted this, a number of people have asked us how they can take action. Many animal protection groups are working to defeat the King Amendment, including HSUS. You can find out how to take action on their website. Also, while signing an online letter to your Representative is always a good start, writing a personal letter is even better, calling is always a good idea [you can ask for the person in their office who handles agriculture issues and find out if they know about it and, if so, where they stand,] and visiting their offices is even better. Write a letter to your newspaper, or an op ed. Spread the word by sharing this article on Facebook and Twitter. This is all happening right now, so don’t delay. As animal lobbyist Ledy Van Kavage likes to say, politics is not a spectator sport!)

Animal Law Podcast #84: The Case of the (Un)Ethical Eggs

Rising Anxieties: Why Animal Agriculture is So Scared

Mariann Gets Even Older (and Wiser?): Donate to Mariann’s Birthday Wish for...